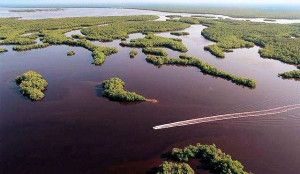 A mandatory education class for boaters using Florida Bay waters within Everglades National Park will be free but a mandatory boat permit will cost.

Those proposals to protect the bay’s shallow waters are written into the national park’s new management plan but no start dates have been announced.

Regional boaters using bay waters in the park will be assessed a fee “probably in the $50 to $70 range” to fund law enforcement, channel marking and management of new poll-or-troll zones, a sanctuary report says.

The permit fee likely will be lower for short-term visitors, and annual permit costs may be reduced in the first year of implementation. No start date has been announced.

The boater-education course, when approved, will be offered free online. Boaters planning to enter the park’s bay waters, which cover about 800 square miles, can take the “e-course” at home.

Kiosks also are proposed for the park’s Flamingo base and at the National Park Service’s Florida Bay Science Center on Key Largo.

The Eppley Institute for Parks and Public Lands, based at Indiana University, is designing the course with assistance from the National Parks Conservation Association, which designed the voluntary Eco-Mariner program.

“Boating visitors to Everglades National Park will hit the water with a wealth of knowledge and resources to protect them, their boat, and the amazing ecosystem they came to enjoy,” an Eppley report says.

The education program, funded by a grant from the Florida Bay Stewardship Committee, is expected to debut sometime in 2016.

The Bonefish and Tarpon Trust based in the Keys is working with the University of Alabama “to develop a [geographical information system]   navigation app that will be tied to boater education.”