Jackson Landers grew up in a vegetarian household. Now he hunts and butchers much of his own meat. In the past five years, he’s focused on hunting and eating invasive species. In his book, Eating Aliens: One Man’s Adventures Hunting Invasive Animal Species

, the 35-year-old Landers chronicles his travels around the country as he learns to hunt, butcher and eat various invasive species.

Why Hunt And Eat Invasive Species?

After he started eating meat regularly, Landers figured it would be wrong to continue the practice if he recoiled when he had to touch it raw. He felt it was only ethical to learn how to hunt if he was going to continue to eat animals.

As Landers became more comfortable with hunting, he also learned about the natural ecosystems where he lives in Virginia–and how these ecosystems were threatened by invasive species. He wanted to take action:

“I don’t have a lot of money to buy land or the skills to cure injured condors. What I have to offer is to hunt. I was starting to wrap up The Beginner’s Guide to Hunting Food [another book by Landers] and I decided to run full speed ahead, hunting and eating as many invasive species as possible.”

About five years ago, Landers started researching how to hunt and eat invasive species like snakehead, nutria and the giant Canada goose, documenting his adventures in his blog and then later in his book.

“Florida may be past all hope, with the Everglades riddled with some two hundred thousand reticulated [sic] Burmese pythons eating their way through what was once a delicately balanced ecosystem. In many parts of the state, iguanas up to six feet long devour every plant in sight. With no local predators adapted to eating them, they reproduce unchecked.”

However Landers is optimistic about what would seem to be a depressing human trait: Driven by insatiable appetites, people can be quite adept at destroying things. He says, “When human beings decide that something tastes good, they can eat an animal to extinction. That kind of destructive behavior can be harnessed for a good purpose.”

Landers points to the passenger pigeon as an example. In the 1800’s, there were billions of passenger pigeons in North America. When hunters realized they could easily shoot numerous pigeons and then sell them to grocers, the bird became a popular and inexpensive meat, like chicken. By 1914, there was only one passenger pigeon left at the Cincinnati Zoo. When that pigeon died, the species was extinct.

Granted, a pigeon seems more appetizing to some than say, iguana or Nile monitor, but tastes can change. Branding can accelerate that change. Have you eaten any Patagonian toothfish lately? Marketers rebranded the fish, which is flaky, tender and buttery, as “Chilean sea bass.” By 1999, the fish was already in trouble.

Of course, Americans are generally more comfortable eating fish and fowl than reptiles. This is where Landers comes in. He wants to help familiarize Americans with other perfectly tasty, if less glamorous, invasive species like the black spiny-tailed iguana. 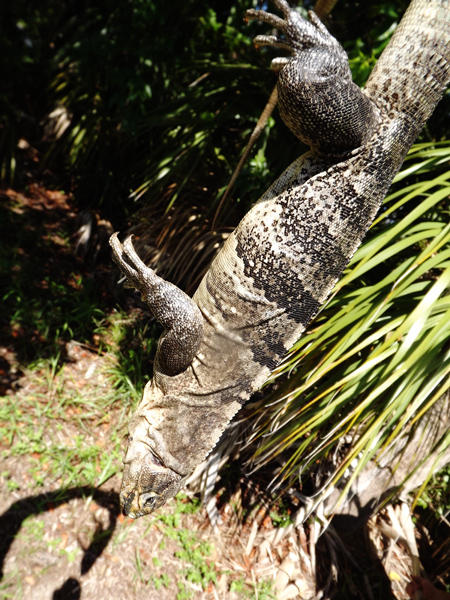 It’s a familiar tale in Florida: About thirty years ago, an exotic pet owner released a few of these iguanas on Gasparilla Island, a tony resort isle off the coast of Southwest Florida. For a while, the iguanas were a quirky part of life there. People became concerned after the creatures turned their gardens into barren wastelands.

“By the time I came to Gasparilla Island,” Landers writes of his visit, “many plants hadn’t flowered in years. The spiny tails can climb even the tallest plants and eat the flower buds before they open.” Even worse, the iguanas were eating away the island’s population of gopher tortoises, “a keystone for some 300 other species.”

Once on the island, Landers hopped on a golf cart, which is the island’s preferred mode of transportation. He rode along with George Cera, a man who has made it his job to rid the island of the species. Landers found it challenging to hone in on the iguanas among the manicured lawns and vacation homes. Then, Landers had to carefully aim his rifle at the tiny, marble-sized brain of the iguana, in order to kill it humanely.

He eventually succeeded. A chef on the island helped Cera and Landers butcher their iguanas.

“Much of the meat in the iguana is in the limbs and the tail,” Landers writes. The chef marinated the iguana meat with lime, cilantro, tequila and spices for tacos, which Landers found to be “very good”—“tasting like chicken but with the texture of crab.”

Landers also found good eating with other invasive species on Gasparilla Island, including tilapia and especially pleco, the sucker fish found in freshwater aquariums. He found those to be much tastier than the tilapia.

These days, Landers writes for the Washington Post and Slate. He also leads one-on-one and group hunting classes.