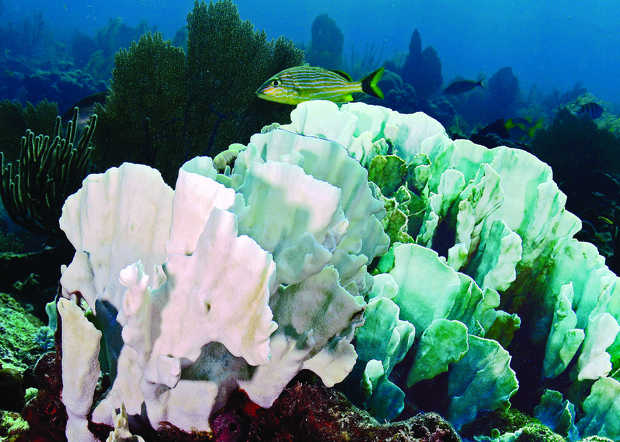 There have been several recent reports about major events of coral bleaching.

Coral reacts to the stress of warmer water by expelling zooxanthellae, the symbiotic photosynthetic algae responsible for nutrient cycling within the coral and the coral’s color.

The coral provides algae with a protected environment and the compounds the algae need for photosynthesis (the process by which plants and some other organisms use sunlight to synthesize foods from carbon dioxide and water).

In return, the algae produce oxygen and help the coral remove wastes. Most importantly, zooxanthellae supply the coral with glucose, glycerol, and amino acids, which are the products of photosynthesis. The coral uses these products to make proteins, fats, and carbohydrates, and to produce calcium carbonate (the white, insoluble solid material that forms hard coral).

Though corals may bleach, they are still alive and able to survive if stressful conditions subside quickly and they are able to regain their algae. Some coral grow new algae and recover from the bleaching. Others die, causing the disappearance of a vital ocean ecosystem.

The dive boat set the anchor at a place called 45 Foot reef and I stepped off the stern.  Descending to the reef, I saw several coral looking unnaturally white.

I finned past a brain coral that was completely white. A bit farther down the reef, I spotted what I thought to be fire coral, but the whitish coloration puzzled me.

I snapped a few shots and decided to check with Ken Nedimyer, founder and president of the Coral Restoration Foundation — a Keys-based organization dedicated to creating offshore nurseries and restoration programs for threatened coral species.

Nedimyer confirmed that the image I took was of Blade Fire Coral, (Millepora complanata), a species of coral that is especially susceptible to bleaching.

“Last year’s bleaching event killed well over half of the fire coral on the reefs that we surveyed, and some reefs, such as Snapper Ledge lost almost all of their fire coral,” Nedimyer said.

“Last summer we spent time looking for unbleached colonies to put in our nursery and on many reef found only about 1 percent that were not bleached,” he said.

“Of the 16 different genotypes that we found and added to our nursery, 14 did not bleach this summer and the other two partially bleached. We are trying to grow the heat resistant corals in our nursery so that when we put them back on the reef, they stand a chance of surviving the hot summers,” Nedimyer added.

“We spent a lot of time last summer and this summer looking for and marking elkhorn, staghorn, and fire coral populations that did and didn’t bleach. There are definitely some genetic strains of all three species that are much more tolerant of heat stress, so part of our long range strategy is to identify which ones are the most heat tolerant and use them to replant areas that receive the most heat stress,” said Nedimyer.

“Heat stress varies considerably up and down the Keys, so matching thermally tolerant corals with reefs exposed to high heat stress will be part of our long term strategy”

“Ultimately there may be a point where it’s just too hot for even the strongest corals, but based on what we’ve found over the last two years, there are still some genetic strains out there that can apparently thrive in conditions that kill more than half of the rest of the population.”

But, Nedimyer is worried about the continued increase in ocean temperatures and disease.

“One of the concerns with these extreme bleaching events is that we’re losing genetic diversity with each event, either from outright thermal stress or from opportunistic disease that is attacking the bleached corals.”

“We lost over a dozen genetic strains of elkhorn coral last year along the reef tract due to the bleaching, and are likely going to lose more this year. Many of those genetic strains are still alive in our nurseries, but many are gone forever,” Nedimyer cautioned.

It seems coral bleaching is a worldwide problem.

As reported by Chris Mooney in the October 8, 2015 Washington Post, “For just the third time on record, scientists say they are now watching the unfolding of a massive worldwide coral bleaching event, spanning the globe from Hawaii to the Indian Ocean. And they fear that thanks to warm sea temperatures, the ultimate result could be the loss of more than 12,000 square kilometers, or over 4,500 square miles, of coral this year — with particularly strong impacts in Hawaii and other U.S. tropical regions, and potentially continuing into 2016.”

“One in every four species of fish live on a coral reef, there are over a million species that live on coral reefs, at least two-thirds of them are pretty unknown to science,” says Hoegh-Guldberg in the report. “Coral reefs provide food and livelihood to 500 million people,” adds Mooney.

According to the National Oceanic and Atmospheric Administration, increases in ocean water temperature have also been the culprit in previous coral bleaching events.

“In 2005, the U.S. lost half of its coral reefs in the Caribbean in one year due to a massive bleaching event. The warm waters centered around the northern Antilles near the Virgin Islands and Puerto Rico expanded southward. Comparison of satellite data from the previous 20 years confirmed that thermal stress from the 2005 event was greater than the previous 20 years combined,” the organization says.

According to the organization, “Longer-lasting and more extensive bleaching events are already on the rise, with further increases expected in the decades ahead as ocean temperatures continue to rise.”

Other problems include ocean acidification, which occurs when oceans absorb carbon dioxide from the atmosphere,  and increases in sea level rise caused by melting sea ice and thermal expansion of the oceans making some reefs too deep to receive adequate sunlight

Warmer waters also increase the incidence of coral diseases such as black band disease, white band disease, white plague, and white pox, all of which can lead to mass mortality of coral, and subsequently the entire ecosystem it supports, according to the federation.

Among the many species of coral that are succumbing to disease and bleaching are pillar coral (Dendrogyra cylindrus) and boulder star coral (Orbicella annularis), both federally listed as “threatened” under the Endangered Species Act.

Disease has moved so quickly that some diseased corals have died in as little as two weeks. This is particularly alarming since most corals only grow an average of 1-2 inches per year and it will take decades for the reef to recover from this loss.

“Florida’s beautiful coral reefs are critical to our tourism and fisheries industries – they provide essential habitat to support a range of biodiversity including many species of fish and invertebrates,” said Meaghan Johnson, of The Nature Conservancy.

The glimmer of hope for this year is that there has been a reduction in the temperature of ocean water due to wind and rainfall. This could help coral recover.

The FRRP says boaters and divers can help corals by eliminating contact with the corals. Divers can help diminish the possibility of disease transmission by not diving on another reef after diving on a reef that has diseased coral.

All of us can help protect the health of coral by reducing stress on coral from land-based sources of pollution, coastal construction projects, and harmful fishing practices.

Public and private gardens, including the green places (Wildlife Corridors) in each individual’s yard, play a wide role in wildlife and bird conservation. They create an urban or suburban corridor to enhance migration. For instance, in Key West there is a corridor from the Botanical Gardens on Stock Island to the salt ponds beside the…

This October 6th, a group of scuba divers submerged in the Atlantic Ocean at the Florida Keys National Marine Sanctuary to compete in the Underwater Pumpkin Carving Contest. The annual contest is held every October near a shallow coral reef off Key Largo. Divers of all ages used their carving skills to transform the pumpkin…

Reef Environmental Education Foundation is a Key Largo based organization that works at conserving marine environments worldwide through fish counts, lionfish derbies and other research projects it regularly conducts on the water. Since its inception in 1990, it has amassed an army of roughly 60,000 volunteers. Each year, to honor the countless hours dedicated by…

Summer may be slipping away, but you still have time to slip beneath some waves. The best part is — you don’t even have to leave the country to do it. Yahoo Travel went in search of easily accessible and interesting places to don fins, mask, and snorkels for a fun day of fish peeping….