The first moment most visitors notice they have reached the Florida Keys is at the Jewfish Creek Bridge at MM 107. This is at the Southeastern end of the 18-mile stretch and is a short distance, across Lake Surprise, from Key Largo. 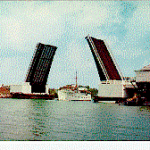 The previous bridge, built in 1944, was 223′ long and, as many tourists know, a drawbridge. When the Jewfish Creek bridge is raised on a sunny weekend afternoon traffic on both sides of U.S. 1 can back up for miles. This picture of the old bridge, on the left, is from an older postcard.

The first information about a bridge at this site comes from Florida Times-Union newspaper articles. We learn that progress was being made from an October 29, 1906, Florida Times-Union newspaper clipping: “Some weeks ago engine No. 10, intended for use in construction work on the Keys, arrived from St. Augustine. This morning the same engine and several box and flat cars were sent down the line to Homestead, then south 17 miles on newly constructed track to the coast of Jewfish Creek. At that place, they were loaded on barges and ferried across the stream [Jewfish Creek and Lake Surprise] to Key Largo.” Evidently, the bridge was not completed in October 1906. An article dated February 10, 1907, stated: “The first train crossed from the mainland to Key Largo (last Friday) with Henry Flagler and a party of friends aboard.” It appears that the Jewfish Bridge and the Lake Surprise causeway were finally operable. 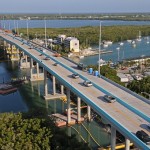 The construction of the new 65-foot-high fixed bridge was begun in the first quarter of 2005. The project was completed in 2009. It carries two lanes separated by a Jersey barrier, and also features outside berms to prevent road pollutants from entering Florida Bay. Although the bridge bypasses the businesses along Jewfish Creek, which is home to a marina and other businesses, exit ramps exist off of the main bridge provide access to them. The side and median barriers of the bridge are painted “Belize Blue,” which was recommended by marine artist Robert Wyland.