“Bloodline” Netflix’s thriller drama centered on the Rayburn clan is still a year away from its return, but it’s never too early to speculate on what lies ahead for the conflicted family. After Danny’s (Ben Mendelsohn) murder, his son Nolan (Owen Teague) may have bigger shoes to fill next season. Season 2 left off with John Rayburn (Kyle Chandler) getting in his car and driving away but it was not revealed where he was heading. If one thing is for certain, he is now on the run as he tries to keep his secret about Danny’s death. Meg (Linda Cardellini), who was also involved in the crime, was close to confessing to her mother Sally (Sissy Spacek) but later decided to just hide the truth. 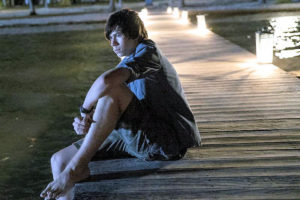 Meanwhile, the finale also saw Nolan blaming himself for what happened to his estranged father. “It was my fault,” he told John’s wife Diana (Jacinda Barrett), referring to how he burned down the restaurant which made Danny return to the Keys. “He came back because of me and he needed money because of me.”Now that John is out of the picture and Danny is dead, there are speculations that the story will revolve around Nolan. Since Teague’s character shares many striking similarities with his father, Nolan seems like the best candidate to be the next Danny. However, the young actor believes that it might not be possible since his character always wants to “be his own person.”

In a recent interview with Tampa Bay Times, Teague further explained that Nolan had a bad relationship with his father, which means that it’s highly unlikely that he’d take after Danny. “He didn’t have a good time with Danny as a dad. Danny was in and out of his life and kept letting Nolan down,” he said. Although he would not be just another version of his father, Nolan’s character still has a lot of issues that could be explored next season.

Related Post  Drink in the Island Life at Lorelei

“Bloodline” season 3 is expected to premiere next year on Netflix, but the network has yet to announce a definitive premiere date.

Did you know the famous Holiday Isle Tiki Bar has been closed for almost a year? Well it’s back and don’t worry, the rum runner stayed put. This is good news for your weekend plans. The debaucherous Florida Keys party bar — the Tiki Bar — has reopened after closing last September for “upgrades and enhancements.”…

With the changes to the US economy, due to the recession from 2008-2010, Americans changed their vacation, and weekend road trip, choices from overseas locations to more local ones that can be driven to. This has had an impact on traffic at many desirable locations through out the US, including the Florida Keys. In the…

Gerry and Wendy Droney have been operating their landscaping and nursery business on Plantation Key since 1986. But now entering their retirement years, the couple sold their operation to the locally-run Forest Tek Lumber late last month. The buyer, which also has a hardware supply company on Big Pine Key, is run by Islamorada residents…

Robert Cvetkovski, who also owns Smugglers Cove in Islamorada, told TRD that he hopes to close on the purchase within three months. He then plans to spend $5 million to renovate the rooms and upgrade the property, including bringing in a new restaurant concept. The 48-room Days Inn, at 82749 Overseas Highway, is spread…