The American alligator, Florida’s state reptile, is a conservation success story. Florida has a healthy and stable alligator population, which is estimated at 1.3 million alligators of every size. They are found in freshwater lakes, ponds, swamps and slow-moving rivers in all 67 counties in Florida. Learn more about alligators. 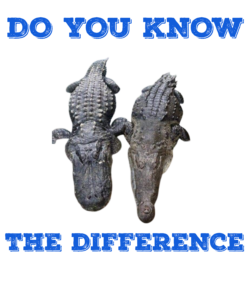 American crocodiles primarily are found in south Florida living in brackish and saltwater habitats such as ponds, coves and creeks of mangrove swamps. Recently crocodiles have moved northward within their range and even inland into freshwater areas of southeast Florida. The American crocodile is an endangered species success story. Since 1975 their numbers have increased from less than 300 to more than 2,000 adult crocodiles. Today, they are classified as a threatened species. The number of crocodile complaints has risen as a result of their recovery and the increasing number of people living and recreating in south Florida.

Source: Learn how to be alligator aware