Numerous coral heads and segments were dislodged and overturned by Hurricane Irma. Survey teams this week completed an assessment of the condition of the Florida Keys reef tract, from Biscayne Bay to Key West.

“It’s very much like what’s observable on land,” said Sarah Fangman, superintendent of the 2,900-square-nautical-mile Florida Keys National Marine Sanctuary. “In some places, the impacts are pretty dramatic and visible and in other places they are much less. So we’re finding the same is true underwater.”

Even in the same location, the hurricane’s impacts differ.

“There are winners and there are losers,” Fangman said. “We’re observing that there’s a lot of sedimentation that is in the water and on the reef. A lot of nutrients were carried into and onto the reef. So that’s good for some things, but it’s not so good for others.”

Sponges, which perform the vital role of filtering water in the reef ecosystem, are among the losers. The sediment is “actually clogging them up and they’re kind of choking,” she said. 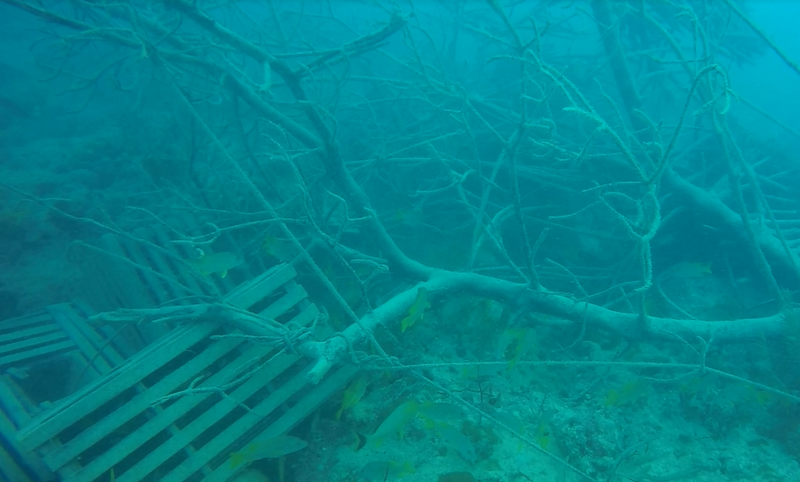 A major problem for the reef after Hurricane Irma is the debris that wound up in the water, like these lobster traps and mangrove segments 60 feet down at Conch Reef.

Other organisms on the reef benefit from the extra nutrients — and the stirred up, cloudy waters can also help protect against coral bleaching, which has been a major killer of reefs around the world, including the Keys, in recent years.

“The sunlight isn’t quite beating down on the reef perhaps as much as it could when the visibility is crystal clear,” Fangman said.

The assessment teams are still compiling the information and beginning the analysis. But Fangman said the early prognosis for the spread of coral diseases is good.

“There wasn’t a sort of giant red flag that flew after their survey saying, ‘Oh my goodness, there’s disease everywhere,’ ” she said.

Next, the sanctuary teams will analyze the information and identify areas where they can help the reef by uprighting overturned coral heads.

The biggest immediate challenge will be removing the copious amounts of marine debris that wound up in the water, everywhere from the backcountry seagrass beds to the reef itself.

At a recent meeting of the sanctuary’s advisory council, recreational divers said they wanted to help with the clean-up. Fangman said that could be in the works.

“We definitely want to engage the community in helping us address that, because that is a problem that’s larger than we are,” she said. “We’re trying to figure out how we can responsibly and carefully do that because there can be potentially hazardous materials. There can be safety issues.”

The goal is a plan to allow volunteers to help clean up “in a way that’s safe and responsible and doesn’t cause more harm,”  she said.