Skip to content
Mote scientists at the Key West laboratory have discovered a faster way to grow coral. 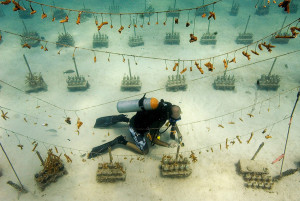 Florida Key’s coral reef is truly beautiful yet, like all coral, extremely fragile.

“The impacts are, that in some places in the world over 90 percent of the coral reefs have disappeared,” said Dr. Michael Crosby, President & CEO of Mote Marine Laboratory in Sarasota. Crosby said the cause is primarily due to climate change, fishing practices and pollution.

That’s why Mote Marine scientists like Dr. Emily Hall in Sarasota are working hard to preserve this vital part of our eco system. “We actually have two experiments going on right now,” Hall said. “We have one where we have this coral in with sea grass.”

Meanwhile, Mote scientists at the Key West laboratory have discovered a faster way to grow coral. “The technologies we have developed down at our facility at Summerland Key can now bring back to life a thousand year old coral in literally two years so that’s a pretty phenomenal breakthrough,” said Crosby.

Last week Mote scientists along with volunteers went down to the Keys to see the coral they have implanted. What they found was astonishing. “They have started as these small little fragments where they have grown to be almost a big a branching coral. And within a year they have gotten to this size a lot of those corals,” said Hall.

Science they never thought was possible.

Thanks to the recent developments in Mote’s Coral Reef Restoration Program and its success, Mote is in the process of building a new state of the art International Coral Reef Research and Rescue Restoration Center in the Keys. It will double size of their laboratory. They will break ground in January 2016. This will be a $5 million facility.