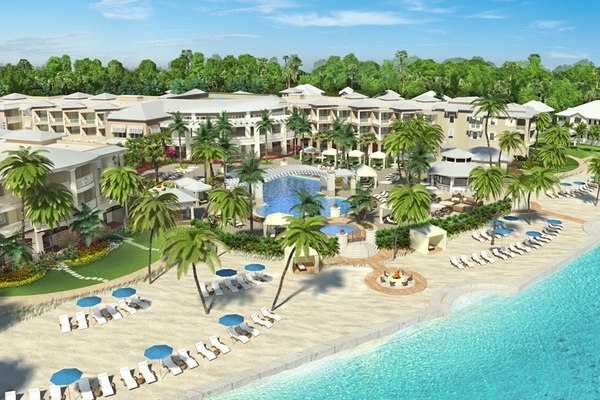 For the first time in more than two decades, a new hotel will open in Key Largo, with the 2016 debut of the Playa Largo Resort & Spa.

“As the first new hotel built in Key Largo in more than 21 years, Playa Largo Resort & Spa will offer a level of luxury, service and sophistication that does not yet exist in the area,” said the property’s General Manager, Shakir Hussain. “As the first Marriott Autograph Collection Resort in the Florida Keys, we will create a culture that offers delightfully unexpected one-of-a-kind curated experiences.”

One of the resort’s most impressive features is its setting. “The resort’s location on 14 and-a-half acres allows for panoramic views of the Florida Bay,” said Hussain. “Our open-air lobby will also serve as an impressive entrance to the hotel, with views of the bay beyond.

The property will also be distinguished by its design. “The resort’s design reflects the historic architecture of Old Key West and is reminiscent of an elegant residential beach house with an Ameri-Caribbean feel,” said Hussain. “Unlike most hotel buildings being constructed parallel to the shoreline, Playa Largo’s four three-story towers are angled at 270 degrees to the shoreline, allowing more views of the bay from both sides of the buildings.”

The resort, which is accepting reservations for March and beyond, will feature 155 luxury guestrooms and suites with separate living rooms, 10 private bungalows and a plantation-style beach house with private lawn, pool, gazebo and beach area. “Private bungalows are bi-level cottages tucked away into an island setting of mangrove and gumbo limbo trees,” said Hussain, adding that they feature master bedrooms and private balconies on the second floors and living rooms, plus kitchen and walkout lanais on the first floors.

For its part, the two-story Beach House features three master bedrooms and en suite bathrooms, living and dining room and a full kitchen.

The resort will also house three decidedly distinct restaurants. The waterfront Sol by the Sea will focus on fresh seafood entrees, and Las Olas will serve as the resort’s signature ceviche bar. “Flagler’s Steak House will be the only upscale steak restaurant in the Upper Keys,” said Hussain.

In another first, the property’s Ocean Spa will serve as Key Largo’s only full-service spa, salon and fitness center.

Playa Largo will also house a kids’ activity and nature center, as well as a private marina and boat ramp. “We also have a number of venues for groups and weddings including a 4,700-square-foot ballroom and an expansive 8,000-square-foot wedding lawn with gazebo,” he said.

Meanwhile, the resort is targeting what Hussain referred to as “affluent global travelers” and “independent-minded adventurers.”

From a geographic standpoint, the South Florida drive market will account for a large number of the resort’s guests. “Secondary geographic areas will be the Atlantic East Coast with major feeder cities like New York, Boston, Philadelphia and Atlanta as well as Canada,” Hussain said. “The emerging markets developed will be the Scandinavian areas of Europe that seek diving and national parks while traveling to the United States. We are also expecting to expand the Latin American markets from Miami to Key Largo with short trips to the Upper Keys.”

One of the benefits of the resort’s location in Key Largo is its close proximity to Miami, Hussain said. Key Largo is the closest of the Florida Keys to the U.S. mainland and just an hour’s drive from Miami International Airport.

The resort also expects to benefit from the cache of the Marriott Autograph Collection. “Being part of the Marriott reservation system and rewards program allows us to attract travelers who are already loyal to this huge international brand,” he said.

In the end, Hussein predicts that Playa Largo will most notably make a name for itself based on superlative service. “The number one and strongest selling point will be our personalized service provided by well-trained and professional staff,” he said.