Has Cuba impacted our environment? Here are three species that have made the leap.

This little lizard has an aggressive streak. Swiftly, quietly, the brown anole has overrun Florida. Sometimes called the Cuban anoles, they have become the most abundant vertebrate on Florida land, with recorded populations exceeding 10,000 per hectare.

But really, this is a tale of two lizards. When the brown anole first started to colonize the Florida mainland in the 1940s, it came across another lizard, small and slender just like itself.

The bright green Carolina anole had been the only anole lizard native to Florida, and it had prospered across the Southeast United States. But, suddenly, it found itself in a turf battle with the invading brown anole.

They were both color-changing lizards, between 5 to 8 inches in length, competing for the same territory and the same food. But the brown anole had the upper hand. Back in Cuba, it shared an island with over 60 other anole lizards. It had to bulk up to face its rivals.

“In some sense, it’s better evolved, better adapted to competing with other anoles, so when it gets to Florida, it’s more aggressive and a little bit heavier,” said Yoel Stuart, a post-doctoral researcher in integrative biology at the University of Texas at Austin.

He told the Times-Union that he has heard many native-born Floridians lament the disappearance of the green Carolina anole in recent years, as the brown ones took over.

But all is not lost for the Carolina anole.

Stuart led a study of Carolina and Cuban anoles, and he found that the little green lizards were evolving rapidly to face down the invading force.

For their study, Stuart and his colleagues “battled weather and salt water and malfunctioning motors and leaky boats,” to reach isolated islands on Florida’s Atlantic coast.

They arrived armed with what Stuart describes as “a little extendable fishing pole with a little lasso at the end of it.” And when they spotted a lizard, they tried to slip the lasso around its neck, to collect measurements.

The Cuban anoles had, as expected, settled all but five of the 30 islands they visited. But how quickly the Carolina anoles were reacting surprised the researchers. They had fled to the canopy where, in the course of just 15 years, they had sprouted vastly bigger feet with stickier scales.

“If human height were evolving as fast as these lizards’ toes, the height of an average American man would increase from about 5-foot-9 inches today to about 6-foot-4 inches within 20 generations,” Stuart said in a news release. That would make the average American the same size as a NBA shooting guard.

That rapid evolution will likely allow the Carolina anole to coexist with the brown anole.

“It’s not going to go anywhere,” Stuart said. “It’s just going to be a little less abundant, a little bit higher up in the trees.”

But Stuart sees the brown anole’s rampant success as a warning, especially as other exotic lizards try to make Florida their home. He points out that South Florida is under siege by tegu and monitor lizards.

“People should realize if they buy a pet and can’t keep it, they shouldn’t just release it,” he said. “You never know which one is going to take off and start breeding in the wild.”

The Cuban brown snail may have crawled into Florida with the help of one man, Charles Torrey Simpson.

Simpson was a naturalist by trade, at a time when Florida was still largely frontier. When Simpson arrived in South Florida during the late 1800s, settlements like Miami were sparsely populated, and the wilderness teemed with unknown species.

Simpson cataloged many of Florida’s flora and fauna, and his work earned him nicknames like the “Sage of Biscayne Bay” and “the John Muir of the Everglades.” But his specialty was shells. He had a reputation for being able to identify 10,000 different shells by sight, by their Latin names no less.

During a trip to Cuba, Simpson picked up some snail specimens to bring home to Little River, Fla. There he liberated them among Florida’s tropical hammocks.

“I have introduced a number of other snails from Cuba and Bimini,” Simpson wrote to a colleague, G.H. Clapp, in 1918. “I simply introduced the things for ‘company’ and not for any ‘scientific results.’ ”

Nearly a century later, professor John Capinera follows in Simpson’s footsteps, studying Florida’s snails and slugs at the University of Florida. It’s a field that “had gone neglected for a long time,” Capinera said. The Cuban brown snail was once “virtually unstudied.”

Being one of the few people to conduct research on the snails, Capinera finds himself on the phone nearly every day with worried gardeners. On the day Capinera spoke to the Times-Union, he had already fielded two phone calls.

These snails grow to be about an inch wide, with a round, spiraling shell atop their backs. They are common in South Florida but, according to Capinera, they have “spread up the coast.” He speculates climate change might have allowed them to inch northward, or perhaps it was simply a matter of time.

Capinera considers the Cuban brown snail to be simply a “nuisance,” since it preys on the ornamental plants that gardeners and nurseries keep.

“The impact is mostly cosmetic. It doesn’t threaten the food supply,” he said.

Rather than poisoning the snails, Capinera recommends removing them by hand when possible. The damage done by misapplying pesticides far outweighs the snail’s ravaging appetites, he explained.

“The more poisons we put in the environment, the more difficult it is for us to preserve the nature of our environment and to protect the organisms that are at risk,” he said.

Elizabeth Roznik’s truck was rumbling north to Gainesville, when she noticed something startling in her rearview mirror.

Plastered on the glass between the truck’s cab and its covered bed was a huge Cuban tree frog, identifiable by its bulging eyes and fat toe pads. The species is invasive to Florida, where it has crept farther and farther up the peninsula, all the way to Jacksonville.

Roznik, who has researched the Cuban tree frog in her studies of amphibians, had heard about the species hopping aboard cars and traveling northward.

“I was like, case in point. That’s exactly what happens,” she said.

The species is the largest tree frog in North America, but it was never meant to be here. It was introduced to the Florida Keys in the 1920s, likely as a stowaway brought stateside in shipping crates.

As a post-doctoral fellow in integrative biology at the University of South Florida, Roznik works firsthand with Cuban tree frogs.

“They’re voracious eaters. If you’re feeding them crickets in the lab, they get pretty excited,” she said. “They’ll try to bite everything in sight, including your fingers if they’re in the way.”

That same, voracious appetite is what makes the Cuban tree frog so harmful to the Florida ecosystem, researchers say. They prey on insects, lizards, snakes and at least five different species of native frogs. When all else fails, they even cannibalize other Cuban tree frogs.

But the Cuban tree frog does more than just devastate Florida’s ecology.

Suzanne Simpson, a conservation lands biologist at the Bayou Land Conservancy in Texas, has seen them turn into a nuisance for humans as well.

“They are large enough — believe it or not — to cause power outages by getting into utility boxes,” she said. “Also, you get reports of someone who says they have a cat in their walls. Whenever Cuban tree frogs feel threatened, they will emit this sound that’s almost like a screeching cat.”

While Cuban tree frogs have yet to expand beyond Florida, Simpson believes that they might spread across the Gulf Coast in the future.

“They can actually, at least in the short term, survive much lower temperatures than they would ever experience in their native habitat in Cuba,” Simpson said. “That implies that their temperature niche is wider than one might think of a tropical species.”

With temperatures projected to increase in the coming decades, cold snaps and short freezes might not stop Cuban tree frogs from colonizing more territory, Simpson said. Americans may soon find the Cuban tree frog well beyond the confines of Florida, threatening an even larger swath of American biodiversity.

What do you do with an invasive fish, covered from head to fin with venomous spines as sharp as hypodermic needles; a fish that can’t be caught with a rod or in a trawling net as it multiplies rapidly, deep in our oceans, flummoxing fishermen and scientists alike? Lionfish. Note: Venomous is not the same as…

There is a lot of discussion about iguanas in the South Florida landscape. This exotic species is not native to FL but has been in the state for a while. These creatures are a unique part of our Broward environment. Like it or not, we are forced to share our living space with them. Some…

Bridge Building humor A third generation Cuban immigrant was walking along a Key West beach and stumbled across an old lamp. He picked it up and rubbed it and out popped a genie. The genie said, “OK, OK. You released me from the lamp, blah blah blah. This is the fourth time this month and… 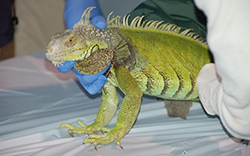 IveGot1 brings the power of EDDMapS to your iPhone. Now you can submit invasive species observations directly with your iPhone from the field. These reports are uploaded to EDDMapS and e-mailed directly to local and state verifiers for review. IveGot1 was developed by the University of Georgia Center for Invasive Species and Ecosystem Health through…

The organizers of the first sanctioned Hobie Cat sailboat race between Key West and Havana, Cuba, will be trading in their sails for high performance engines for another flotilla between the two countries in November. The group of Key Westers who organized the Havana Challenge in May will be kicking it up a notch in…

The fight to control the invasive lionfish is about to get real if Ft. Pierce divers Bob and Maria Hickerson have anything to say about it. Hickerson and his wife — who run a series of highly successful lionfish derbies along Florida’s East Coast — also manufacture a popular line of lionfish harvesting gear, including…