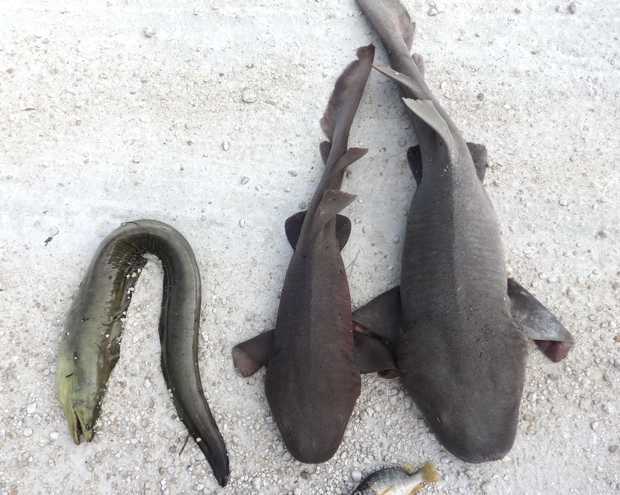 A state marine officer found two undersized nurse sharks and a dead moray eel while inspecting a catch made from an Islamorada dock Thursday. Officer Paul Hein of the Florida Fish and Wildlife Conservation Commission spotted several people fishing off a private dock near Tea Table Key around 3 p.m. Hein saw two nurse sharks, one still alive, landed near the group, along with a small schoolmaster snapper. All the anglers denied having caught any fish, Hein said in a report. Asked again after Hein pointed to the landed fish, “nobody had any recollection of catching the fish,” said agency spokesman Officer Bobby Dube. But inside a cooler, Hein found a large moray eel and two snapper. Eventually, Alain E. Tavarez, 26, of Homestead and Alexander E. Toruno, 34, of Miami were arrested on counts of possessing undersize sharks, exceeding the one-fish bag limit for shark, possession of undersized snapper and failure to land the eel (a marine-life species) alive. Toruno was released Friday after posting a $3,280 bond. Tavarez also was released Friday but no bond amount was available. None of the group was able to produce a fishing license. One person was ticketed. Florida’s saltwater shoreline licenses are free to state residents but are mandatory in most instances.