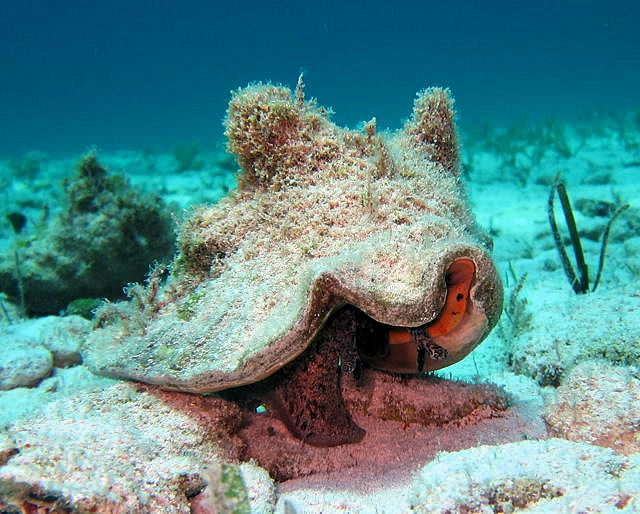 The queen conch is a large, marine, gastropod mollusk. Mollusks (from the Latin word molluscus, meaning "soft") are a phylum of invertebrates with over 100,000 known species. The majority of mollusks, including queen conch, are of the Class Gastropoda, whose name translates from Latin as "stomach foot." Other types of mollusks include oysters, clams, octopus, and squid.

Mollusks are soft-bodied animals that may have a hard external shell composed of calcium carbonate, a hard internal shell, or no shell at all. Queen conchs have an external, spiral-shaped shell with a glossy pink or orange interior.

Queen conchs have separate sexes and reproduce through internal fertilization. After mating, females lay long egg masses that contain hundreds of thousands of eggs, which hatch after about 5 days. Larvae then spend about 18-40 days floating and feeding in the "plankton" before settling to the bottom and metamorphosing into the adult form. Once in their benthic, adult form, they graze on algae and detritus.

The queen conch is a long-lived species, generally reaching 20-30 years old; however, the lifespan has been estimated as up to 40 years.

Queen conchs are prized for both their edible meat and attractive shell.

Habitat The queen conch lives in sand, seagrass bed, and coral reef habitats. It is found in warm, shallow water and is generally not found deeper than 70 feet (21 m).

Distribution The queen conch is found throughout the Caribbean Sea and Gulf of Mexico, and ranges as far north as Bermuda and as far south as Brazil.

Population Trends Queen conch abundance is declining throughout the species's range as a result of overfishing and poaching. Populations of the species in Honduras, Haiti, and the Dominican Republic, in particular, are currently being exploited at rates that may be unsustainable.

Threats - harvest for meat and shells. There has been increasing concern about the conch fishery as populations have been depleted. Queen conch meat is used mainly for consumption but is also used as fishing bait. A by-product of the meat trade are conch shells, which are used for jewelry or sold as curios. Trade from many Caribbean countries is known or suspected to be unsustainable, and illegal harvest, including fishing of the species in foreign waters and subsequent illegal international trade, is a common and widespread problem in the region (Theile 2001).