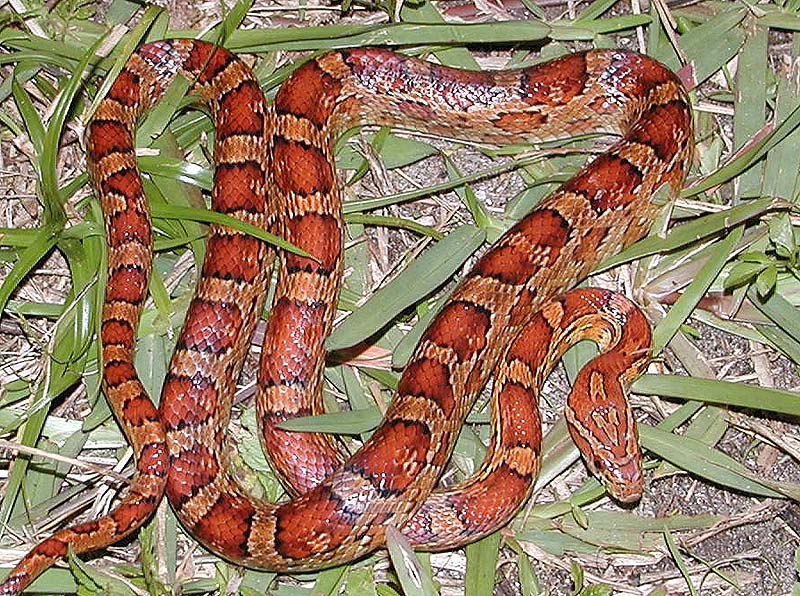 Red rat snake (Pantherophis guttatus) Also know as the Corn Snake.Physical Description The red rat snake is the best climbing species of snake in Florida (Tallahassee Museum, n.d.). Its average length ranges from 30-48 inches (76.2-121.92 centimeters), but it can grow up to 72 inches (182.9 centimeters). This species varies in color, but usually has a yellowish-tan to orange body color, with large red or faded blotches located on their back, a belly with dark marks, and a “V” on the top of its head (Huegel and Cook 2004, Florida Natural Areas Inventory 2001).Life History The diet of the red rat snake primarily consists of small mammals (i.e. rodents), lizards, birds, and bird eggs. This species kills its prey by constriction, as they have no toxic venom or fangs.Male red rat snakes begin courtship by locating a female and moving along its back in a wavelike form to begin mating. Breeding occurs between the months of April and June while eggs are laid in the summer. Females lay 3-40 eggs per nest, with one to two clutches being laid per year (Ernst and Ernst 2003, Florida Museum of Natural History, n.d., Bartlett and Bartlett 2003). Red rat snakes, in the Lower Keys, are usually smaller than those found on the mainland, which may explain why their clutch size is smaller.Habitat and Distribution Red rat snakes inhabit pine rocklands, rockland hammocks, mangrove forests, and a variety of disturbed habitats, including urbanized areas. This species is found in every county of Florida. The protected population in Florida is known from many localities in the Lower Keys and has been observed or collected on Bahia Honda, Big Pine, Big Torch, Boca Chica, Cudjoe, Geiger, Johnston, Key Vaca, Key West, Indian, Little Pine, Little Torch, Middle Torch, Ramrod, Saddlebunch, Stock Island, Sugarloaf, and Summerland keys (Weaver et al. 1992, museum records, Florida Natural Areas Inventory [FNAI] records)
Displaying photo 3 of 14
« Previous Photo Next Photo »
Back To Gallery Page