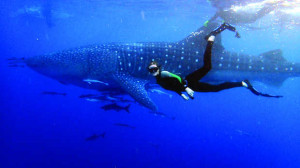 Instructors at Quiescence Diving Services in Key Largo aren’t used to seeing fish bigger than their boats. But that’s just what happened while taking a snorkel trip out to the sunken U.S. Coast Guard cutter Duane. Their boat is 25 feet long, but what was lurking just below the surface was even longer — a whale shark that instructor Caitlin Kelliher estimates to be about 30 feet in length. “He was enormous,” Kelliher said. “It was insane.”Bill May was on a separate boat fishing near the Duane, and he too was awestruck by the giant fish. “I have been fortunate to see some incredible sharks while out fishing, with this being the best,” May said.Whale shark sightings in the Keys are not an anomaly, but they don’t happen that often either.

Several years ago one decided to hang out in Vaca Cut in Marathon for about a week, and became a tourist attraction.Jerald Ault, a professor with the department of Marine Ecosystems and Society at the University of Miami’s Rosenstiel School of Marine and Atmospheric Sciences, said whale sharks, which filter feed on plankton and other microorganisms, show up when fish spawn. “They’re big fish, but feed low on the food chain,” Ault said. “They’re not a common sight here. In fact,

I can count on one hand the amount of whale shark sightings in South Florida.”Not only did the Key Largo gentle giant make an appearance, it also stuck around the Duane for a few hours, Kelliher said.Kelliher and her colleagues, Quiescence owner Rob Blesser, staffer Mike Kanik and intern Cameron Burris swam with the shark and took photographs.”It’s just on of those reasons why diving in the Keys is so awesome,” she said. “You never know what you’re going to see.” Kelliher said the shark would swim the length of the 327-foot Duane and dive down deep once it reached the ship’s bow.

Whale sharks are the largest known fish, averaging 45 feet in length and weighing on average 15 tons. The largest whale shark on record was found in the Gulf of Thailand. The animal was 59 feet long and 75,000 pounds, Ault said. “They’re mammoth,” he said.

As you would expect Seafood Rules in the Florida Keys restaurants. But you can’t eat seafood for every meal…or can you? Most serve up cuisine reflecting the tropical Caribbean flavors. Tropical fruits and veggies, fresh seafood, and tropical drinks both alcoholic and non-alcoholic (you must try Mrs. Mac’s Key Lime Freeze).  In season you can enjoy…

We wanted to touch a little piece of movie history, so we headed down to Key Largo, Fla., to ride on the African Queen. The African Queen is a 30-foot steel-hulled steamship built in 1912 as the S/L Livingston to navigate the upper Nile River. John Huston leased it in 1951 to make the movie…

Why go For the holiday-maker looking to get off the beaten track a little bit and hoping to experience something unique and laid back, the Florida Keys is a perfect escape. The Keys comprise 110 miles of islands in south Florida including Key Largo, Islamorada, Marathon, Big Pine Key and the Lower Keys and the…