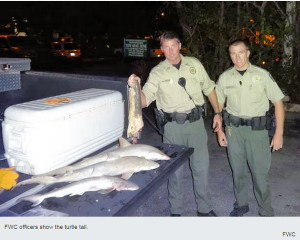 They might not have killed it, but two Miami men landed in the Keys jail Thursday when they were found with the tail of a loggerhead sea turtle in one of the men’s truck. David Hernandez Sordo, 48, and Pedro Suarez, 59, remained in the Monroe County Detention Center Friday, each charged with a felony count of possessing a sea turtle. Loggerheads are federally protected due to their threatened status. The two are also are charged with a misdemeanor for having more sharks than bag limits allow. Along with the turtle tail, the pair had two blacknose sharks and one sharpnose shark.

Florida Fish and Wildlife Conservation Commission officers Jeremy Foell and Mitchell Robb pulled over Hernandez Sordo and Suarez at 3 p.m. Thursday at mile marker 54 after Hernandez Sordo ran a red light in his gold Ford pickup. Also, a 24-foot Mako boat he was towing wasn’t secured to the trailer with tie-downs.

Foell saw a bloody fillet knife in the truck and the two men admitted to fishing. They gave officers consent to search the vessel after admitting to catching multiple mackerel, FWC spokesman Bobby Dube said. That’s when Robb found the turtle tail beneath the sharks. The suspects reportedly said the tail “floated past their vessel” and they took it from the water and put it into the cooler to use as bait.

The truck, boat and trailer were seized for possible forfeiture. Additional charges may be lodged pending consultation with the Marathon State Attorney’s Office. No court date has been set.