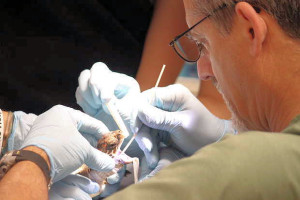 “Marine turtles with FP have external tumors that may grow so large and hanging as to hamper swimming, vision, feeding and potential escape from predators,” she said. “Over 50 percent of the green sea turtle population in and around the Florida Keys is infected with FP.”

The Turtle Hospital admitted 93 sea turtles in 2014, 68 in 2013 and 56 in 2012. Zirkelbach attributes the increase of diseased sea turtles to increased pollution in urban areas and farm-water runoff.

She also says more sea turtles are being rescued because of educational programs delivered to the hospital’s 75,000 visitors last year.

“The programs encourage visitors to make a conscious effort to fish and boat responsibly and to keep an eye out for sick or injured turtles. At least six out of 10 of our rescue calls now come from people who have been through our educational program.”

Zirkelbach said the health of sea turtles is a good gauge of how healthy sea water is. Increased cases of sick sea turtles could be an indicator that more pollution is making its way into seas and oceans.

“Sea turtles are a canary in the coal mine of sort in our oceans,” she said. “In the process of saving one of the earth’s most time-honored creatures, we may just be saving ourselves, too.”