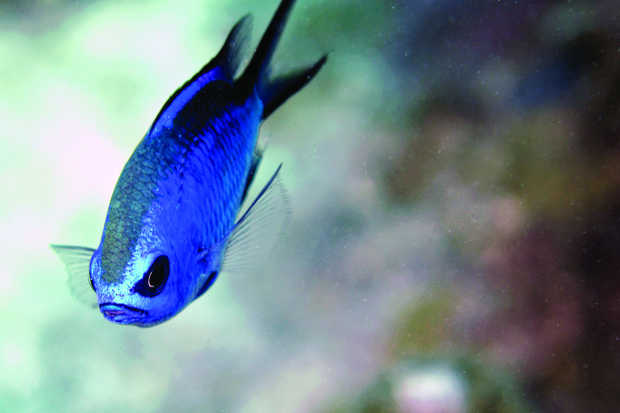 “Dude, that’s one grumpy looking fish,” said the mate as I showed him the image on my camera. “But,” I replied, “It’s a variety of damsel fish.” “Don’t look ladylike to me,” he said. “Still say it’s a nasty looking fish dude” Just to make sure the mate just wasn’t having a bad day, I decided to test the reaction to the fish image on Facebook, the Rosetta Stone of all current knowledge and truth as we know it. Wow! The image got lots of “likes” — not as many as “grumpy cat — but a respectable number.My self-esteem was redeemed.

This had all started out with good intentions. I decided to use my new macro lens on a fairly deep dive. Hopping on the dive boat I noticed that some of the other divers had different plans. They were armed with large spear guns. All well and good, but this meant we weren’t going to a Sanctuary Protection Area where fish are less skittish because they are protected.  Fish are smarter than commonly perceived. They learn to avoid being real or collateral damage in the ongoing fish wars in the Keys. I stepped into the water and the mate handed me my camera. Drifting to the bottom, I noticed there was a pretty hefty surge that was affecting the visibility.

A macro lens is designed to take close-up photos without a lot of wiggle room for focusing. The surge was making things rough. Also, not being the sharpest photographer in the drawer, I thought, “look at all those pretty little blue fish. I will take a shot of one of them. “The pretty little blue fish didn’t get the “you’re a model” memo. They darted around; the surge moved me back and forth, I took a whole bunch of out-of-focus images and muttered a lot of oaths.  (This is a family publication, so I can’t repeat the oaths.) But then, out of pure dumb luck, I accidently got an image that was in focus — grumpy fish. “What is it,” I thought. So, to avoid snarky comments, I decided to check with Lad Akins, director of special projects for the Environmental Education Foundation (REEF).I sent him an e-mail, and wanting to sound like a real fish expert, said, “Is this a purple chromis?”

Lad sent back a cryptic e-mail saying, “it’s a blue chromis. There is no such thing as a purple chromis.” Oh well, my self-esteem was back in the depths of a well-developed inferiority complex. But, there was still the “likes” thing to fall back on. Ok, let’s find out about this blue chromis these bright, iridescent blue characters whose typical day consists of feeding or spawning during the day, finding shelter and bedding down for the night at dusk, and hiding in the reef until sunrise. Sort of like me without the spawning part. Blue chromis primarily live in the western portion of the Atlantic Ocean from the Gulf of Mexico and the Caribbean Sea up to Bermuda in reefs down to about 60 feet deep. Healthy reefs are important for blue chromis by providing good locations for feeding, breeding and protection from predators.

Males, which may look dark grey-blue or light blue, maintain small territories for nesting and hide in steep reef slopes or patch reefs in areas with many holes and crevices where they can hide at night. One of their favorite hiding spots is staghorn coral, one of the types of coral the nonprofit Coral Restoration Foundation grows and out plants in the Florida Keys. Juveniles school above and hide in a coral heads. Blue chromis are, well, sort of “R” rated. They are promiscuous, with several females visiting and laying eggs at many nests and males mating with several females. Male’s success in all this may be determined by the condition and location of the nest and the presence of eggs already in the nest. Males have a few tricks up their fins to get the attention of the females. They may  do a “signal jump” by rapidly propelling themselves up vertically and then looping  back to the starting position, or they may  swim in a zig-zag fashion above their territories, swimming laterally and rotating 180 degrees for inspection. If this works, the male leads his paramour to his nest using an exaggerated side to side swimming motion — sort of the blue chromis swagger. The female nips at the floor of the nest, and the male responds by quivering his fins and skimming over the substrate. He may even do some head butting to help things along.When the female lays her eggs, the male releases milt (seminal fluid). A male may begin to solicit another female whi