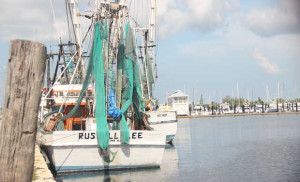 “That’s our workforce housing,” Mongelli, who owns Roostica and the Hogfish Bar & Grill on Stock Island, said, naming off professions from dishwashers to hotel employees.

On a morning run between restaurants, he waves to locals as the smell of fish overwhelms the air. Mongelli, a long-time Conch, opened the Hogfish with one sandwich on the menu in 2002.

Since then, he has seen Stock Island’s oceanside growth from a Key West outskirt — it’s just five miles from Duval Street — with shrimpers and fishermen to an island on the brink of major development.

“Throw Cuba into the mix, I think Stock Island will be a jumping-off point. I think it will be a boom town,” Mongelli said, referencing the easing of diplomatic relations between the U.S. and Cuba over the past year; an American flag was raised Friday over the U.S.’ embassy in Havana — the first time such a flag has flown there in 54 years.

A ferry terminal for U.S.-Cuba travel, which has been a talking point among locals for months, would require a marina such as Safe Harbour on Front Street or the Stock Island Marina Village on Shrimp Road, to be outfitted as an international port of entry.

The Singh family is one of the most notable real estate developers in the Keys led by Pritam and his son Noah. They’re on the development boat.

At its June 10 meeting, the Monroe County Commission approved redevelopment plans for the Oceanside Marina on Peninsular Avenue. Pritam Singh bought it for $5 million from BB&T bank in 2013, along with property on Suncrest Road and Third Avenue. Plans for the marina alone call for 78 residential units, 17 hotel rooms and a 150-seat restaurant spread out across four buildings.

Also on June 10, the County Commission approved a development agreement with Roger Bernstein for property at 5700 4th Ave., 5550 5th Ave. and 6500 Front St. Although plans include a 150-seat restaurant and a 122-room hotel, Bernstein said that what the county approved was simply to lock the zoning rights in place for the next decade.

“We don’t have any immediate development plans for our remaining property,” Bernstein, who owns a portion of the Safe Harbour Marina, said Friday. “We all have a desire to make sure working waterfront, particularly commercial fishing, is supported.”

Bernstein’s tenants include Fishbusterz on Front Street, which had its lease extended by 10 years in June.

The Stock Island Marina Village also has plans to enter the hotel game. New Stock Island Properties LLC, headed by principal Matthew Strunk, bought a portion of the Old Island Harbor site for $16 million in 2010 to develop the village, which now has 220 slips.

The owners have been working with the county on permitting for further development to include a 100-room hotel, 366 parking spaces and a swimming pool. The county received a building permit application on July 31 for site work, including utilities and drainage.

Other than hotels, Ed Swift III, on behalf of the Islander Village on Fifth Avenue, filed for a time extension on permitting July 23 for the two- and three-bedroom-unit affordable housing complex. In asking for the extension, Swift wrote that 43 homes have been completed, with the remaining 46 scheduled to be completed in August 2016. The land Islander Village sits on is owned by the county but Swift has a 100-year lease with the county.

The county approved a major conditional-use permit for redeveloping the property in 2005.

And recently, Key West Harbour, also on Peninsular Avenue, was put up for sale by owner Key West Marina Investments LLC. There is no asking price but it sold for $30.5 million in 2006.

“I think it’s got great potential, when you talk about water and location,” Jodi Weinhofer, president of the Lodging Association of the Florida Keys and Key West, said of Stock Island. “Key West is developed; that’s the next spot to go.”

However, the impending development worries Stock Island locals like Zach West, whose parents had a sailboat off Cow Key Channel. The 2005 Key West High School graduate was startled to see a Mercedes-Benz driving down Shrimp Road the other day. Golf carts and people jogging, too.

“Everything is just changing,” said West, who spent Thursday playing pool at the Shrimp Road Bar & Grill. “It blows my mind, its f-ing heartbreaking.”

While West is concerned about what he says is development ruining what makes the island unique and driving out the workforce, those fairly new to Stock Island, such as Billy Kearins, are a little more optimistic. Kearins opened Coast, a craftsmen shop on Front Street, about two years ago.

“I kind of hope that Stock Island has more of an evolution than a revolution,” Kearins said. “There’s also these 10-year development plans kind of circling everything.”

Down the boardwalk from the Hogfish, Jimmy Wray, who has lived on Stock Island for 30 years, repairs boats within the Safe Harbour Marina on Front Street.

He’s not worried about development.

“It’s not Wal-Mart. If it was Wal-Mart, I’d be worried,” Wray said, referring to plans for the retail giant on Rockland Key. “At least Singh has good taste.”