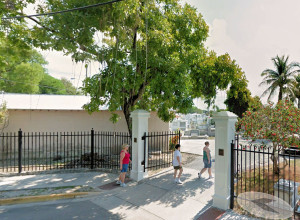 A year after city commissioners balked at plans to build a $532,000 sexton’s house at the historic cemetery, construction is under way on a slightly scaled-down version of the original Georgian-style design. On Monday, city workers continued ripping out the concrete slab of the old sexton’s house, which was demolished last week after the city commission awarded a $445,222 contract to a Key West company to create the revised plan by architect Michael Miller. The original sexton’s house design went from 1.5-stories to a single story and from a 1,510-square-foot building to one that measures about 950. The front porch that faces Passover Lane will have columns holding up the stucco facade.

The sexton’s house, essentially the front office and archives of the Key West cemetery, deserves a dignified building, said architect Michael Miller. “It’s also a place for grieving families to meet to plan the funerals of their loved ones,” Miller said. “It shouldn’t look like an office or a mausoleum, or a place where you would store lawnmowers. I chose the classical Georgian design, the same type of design that City Hall is. It’s classic. ”The revised plans appear nearly identical to the original sketches, save for the half-story and square footage that was scrapped as a cost-savings measure by city staff, which decided to have demolition done in-house. Pedro Falcon Electrical Contractors, of Key West, will build the sexton’s house, having delivered the lowest qualified bid to the city.

Diane Silva, executive director of the Historic Florida Keys Foundation, stood watch over the work site Monday. “We want to make sure we don’t encounter any burials,” said Silva, who holds a Ph.D in anthropology and has taught archaeology. “It’s so old,” she said, adding that she doesn’t expect any unforeseen burials to turn up at the sexton’s house site, although Silva did find an old ruler and some glass pieces that appeared to be antiques on Monday.

The city is taking measures to protect a nearby Kigelia tree — commonly called a sausage tree — and some graves that border the site by boarding them up during the construction. “Crews put the boards around the tree trunk to protect it from damage from equipment,” said Karen DeMaria, the city’s urban forestry manager. “There is also a thick layer of mulch over the root system.

”At least 75,000 souls have been laid to rest at the cemetery, which borders Olivia and Frances streets, along with Windsor and Passover lanes. The Friends of the Key West Cemetery say the minimum burial count is 100,000. The cemetery was founded in 1847, a year after a hurricane washed dead bodies from the coastal sand dunes near what is now Higgs Beach, which had been an earlier cemetery. At 19 acres, the city cemetery is at the foot of Solares Hill, the highest elevation on the island. Construction will last until December, said city spokeswoman Alyson Crean, and the main entrance on Passover Lane will be closed to the public. For now, the sexton’s office will operate from a trailer at 837 Olivia St. All vehicles must enter and leave the cemetery through the Windsor Lane gate, Crean said, and the Frances Street entrance may be closed intermittently for funerals or construction over the next several months.

Commissioners in October 2013 took the advice of city staff and rejected all bids for the sexton house, which former planning director Don Craig pegged to cost about $370,000 to build. Instead, the bids came in starting at $532,000 and as high as $642,000 — far too much to replace the 800-square-foot, 50-year-old office at 701 Passover Lane, city staff said. Commissioners scrapped the 2013 bid and agreed to pay Miller about $17,200 to go back to the drawing board.

Pirate tales and the Florida Keys go together like ice and rum. Unfortunately, in the same way a glass of rum starts to water down when exposed to the still, sweltering subtropical heat, the details surrounding piratical tales have a way of becoming diluted, too. They also have a way of taking on lives of their…

BY JOSH GORE Free Press Staff A group of federal maritime archaeologists are trying to uncover more details of a sunken slave ship near Delta Shoals off Sombrero Reef. Locals name the area The Ivory Wreck, which is located a few hundred yards away from the lighthouse. The name stems from ivory tusks discovered…

In 1930s Key West, a man who called himself “Count von Cosel” fell in love with a terminally ill girl named Elena Hoyos. Her death was the start of a bizarre but true love story that unfolds for theater fans in Undying Love: A Key West Musical, debuting on Valentine’s Day at The Studios of…

Lighthouses in the Florida Keys have a tough task to manage. The area is not only strewn with coral reefs and shoals, but is also a favorite highway for destructive hurricanes and other storms. The Sand Key Lighthouse, the southernmost lighthouse in the United States, has been in operation since 1827, and has borne witness…