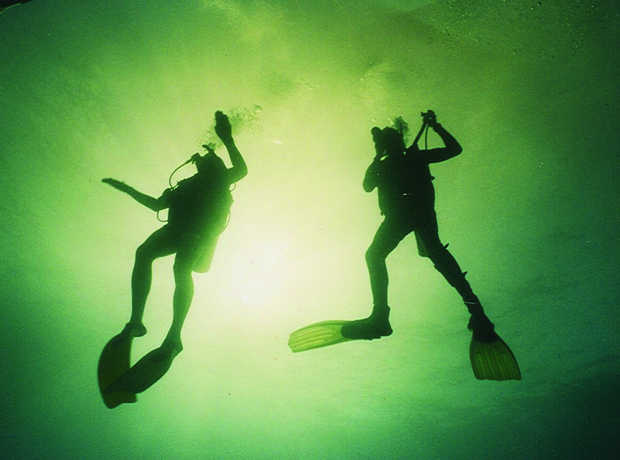 Dawn had just broken and I was paddling my kayak back to shore. The early morning was still. I heard a mother on the beach singing to her young children. The doves added harmony to the melody with their coos. The waves lapped gently against my boat. I totally was at peace.Like many folks I moved to the Keys to be near, on or under the water; it gives me comfort; it never fails to give me a fresh perspective on life, to inspire me with in its beauty, or amaze me with its mysteries.

The ocean is my friend. But, as my wife continually reminds me, “not everyone is like you,” not everyone likes the water. I returned home and turned on my desktop computer, a bad habit left over from my pre-Keys life. Up popped a post on Facebook telling me: “19 Pictures That Prove You Definitely Have Thalassophobia (fear of the sea)” from Brainjet. OK, I was hooked and scrolled through the images. There were the usual suspects and some surprises: sharks, whales, jellyfish, deep water, manta rays, seaweed, sunken ships, chasms, spider crabs and deep blue holes.

My first thought was, “cool images – wish I had taken them.” My second thought was, “really – are people afraid of this stuff?” Because I was already using the computer, I did some research. According to Andre Slade, the owner of OceanFit, who has over 20 years’ experience in swimming education, lifeguarding and coastal safety, the five most common anxieties about the ocean are: seaweed, deep water, loss of control, waves and sharks. Fearof.net expands the anxiety list. It adds fear of distance from land and fear of the vast emptiness of the ocean, and notes how the fear of the sea is fed by TV shows and movies like “Jaws” that dramatize the dangers of the sea and the terrible things that can happened to you if you venture into the ocean to swim, surf or scuba dive. Fearof.net also introduces another big word aquaphobia, fear of water. It seems aquaphobia and not knowing how to swim are big contributors to the fear of the ocean.Apparently a lot of us don’t know how to swim.The American Red Cross, says only 56 percent of Americans have a basic competency in water, meaning they can jump or step into water over their head, return to the surface to tread water or float for one minute, circle around and identify an exit,  swim 25 yards to that point and exit the water.

When I first starting teaching diving I would try to make light of people’s fear of water by saying things like, “I get frightened if I break out in a sweat,” or, “I wear a life jacket in the shower.” It turns out that aquaphobia is actually the fear of all kinds of water and may even be triggered by the water in a bathtub. I discovered my snarky remarks didn’t help ease the anxiety of potential divers. This is a dive column, so let’s relate these fears to diving and how they can be overcome.To become certified as a scuba diver, you don’t need to be a great swimmer, but you should be comfortable in the water, more than just the basic competency described by the American Red Cross. The Professional Association of Diving Instructors, PADI, defines comfortable in the water as being able to swim 200 yards or meters (about the length of two football fields), or 300 meters with mask, snorkel and fins, and to be able to tread water for 10 minutes. Scuba instructors suggested that potential divers who seem uncertain or frightened in the water “brush up” on swimming skills and endurance prior to taking the diving course. I have seen folks do just that and become very competent divers.

Diving certification entails learning skills to deal with fear inducing situations like: running low or out of air; being tired or helping a diver who is tired; cramps caused by muscle fatigue or cold water; and entering and egressing water in waves or rip currents.Divers learn that sea critters, even the so-called scary ones, want to be left alone and most bad encounters result from defensive behavior on the part of the animal.One of the more important rules covered in training is to control fear before it turns to panic. The steps are to stop all activity; think of the best action to deal with the situation and then, and only then, act to deal with the perceived problem.Panic is not a successful method of dealing with a potential problem when diving and can result in a much more serious problem than the one that set off the panic in the first place.I taught one diver in Lake Tahoe who panicked on his first dive. Experience and determination helped him overcome his fear and become an excellent diver and later a rescue diver jumping from helicopters to save people in the ocean.Considering today’s equipment, with proper training,

Coral reefs all over the world are home to some of the strangest and most beautiful animals on our planet including Christmas Tree Worms. One trip out to our reef is all you need to know that the Florida Keys are no exception. At any time you may see sea turtles, sharks or a wide…

It’s that time of year — when Florida residents flock to the land of Hemingway, hammocks and sunset celebrations – the Florida Keys. The 110-mile highway to Key West is peppered with attractions, restaurants and shops to explore, but you’ll need a place to stay and there are many good options. Here are a few…

Visitors to the Florida Keys Reefs can snorkel or dive on the continental United States’ only contiguous living coral barrier reef — which makes the destination a paradise for underwater enthusiasts. Also the third-largest barrier reef in the world, the Keys tract is home to stunning coral formations and brilliantly hued tropical fish. Much like a…