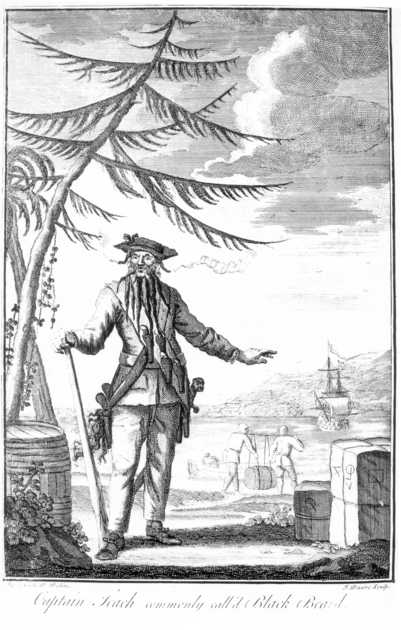 Pirate tales and the Florida Keys go together like ice and rum. Unfortunately, in the same way a glass of rum starts to water down when exposed to the still, sweltering subtropical heat, the details surrounding piratical tales have a way of becoming diluted, too. They also have a way of taking on lives of their own. The notorious pirate Jean Lafayette provides an excellent example of this phenomenon, especially in terms of the Florida Keys. Stories claim his ship anchored off of Tavernier Key or even the significantly more difficult island to reach, Lignumvitae Key. The problem is they are just stories. No one is ever going to be able to prove one way or the other if the pirate ever tucked inside the reef and explored some part of the Keys.

If he did it was not because he was looking for a place to bury treasure. Because only a relatively thin layer of soil covers the limestone substrate that makes up the backbone of these islands, the Keys are not an easy place to dig — except for maybe Lignumvitae Key, as that island has more topsoil than the average Florida key.Clearly there were pirates in these waters; the proximity to Nassau assures this. During the Golden Age of Piracy, roughly 1680-1730, the relatively nearby port of Nassau proved a bona fide pirate port-of-call. One of the reasons Nassau grew to be of such piratical prominence was that the port was deep enough to accommodate the shallow-draft ships utilized by pirates. Also, the harbor was too shallow to allow the naval warships that hunted them to get too close.Another reason Nassau was so successful was that there was a fresh water source.

Unlike Nassau, no harbors found in the Los Martires, the string of islands that would become known as the Florida Keys, ever became a pirate den. Of course, there was a logical explanation; for starters the island chain lacked convenient naturally deep harbors and fresh water sources. In addition, for as long as there have been ships sailing past these islands, they have presented a particular set of challenges for even experienced captains. Between the coral reefs growing in such proximity to the archipelago, shifting shoals and the narrow creeks and passes separating the islands, navigating these unpredictable shallows has proven historically tricky.

While a handful of the islands would have presented more approachable anchorages than others, the fact that no documents exist to support the claims of piratical activity on the islands (other than legend and sailors’ stories — especially in the Upper Keys) it is doubtful that any pirates who may have approached the islands stayed for long. Still, it is absolutely certain that at some point in time pirates stopped here. In addition to Key West, Bahia Honda and Indian Key both possessed naturally occurring relatively deep harbors with accessible fresh water sources nearby. Wreckers, turtlers and fishermen would go on to call these islands home, and it only makes sense that occasionally pirates would come to the islands for one reason or another, too.

Now, before going further it should be noted that the pirates being referred to here are the ones who were ultimately chased out of the West Indies when Commodore Porter based his pirate eradication forces in Key West circa 1822 and not the pirates who smuggled all of the contraband in and out of these islands back in the 1970s and 1980s. Some of those pirates are still around. Having said that, there are some excellent pirate stories than can be associated with the Florida Keys and over the course of the next several editions of Notes on Keys History some of the best examples will be presented.In addition to a first-hand account of pirates operating along the Florida Reef, the unlikely story of Black Caesar, probably the most closely associated pirate with the Upper Keys, will be explored. Black Caesar’s story, in particular, is a classic pirate story with tendrils of circumstantial evidence that can still be found on modern navigational charts. Some of the pirate tales that can be linked to the Upper Keys will prove more legendary than others. One verifiable piratical story will involve an actual artifact, an authentic Jolly Roger flag that once flew over Plantation Key! One of the best local pirate stories involves the namesake of Alligator Reef while another, more modern tale, will end with the first American ever to be executed in the Bahamas Islands.

In the meantime, if any of you modern day pirates who have created more “respectable” careers would like to sit down over a glass (or two) or rum and tell me some of the old stories, give me a call. I’m buying.

Brad Bertelli is a published author of four books on Florida and Florida Keys history. He is the curator of the Keys History and Discovery Center, located at the Islander Resort. His column will appear every other week in The Reporter. Reach Brad with comments and questions at .

Source: Pirates’ history in the Keys is up for debate | Living & Entertainment | KeysNet

At about the same time the dubious wrecker John Jacob Housman first made his way to the Florida Territory, another questionable captain was sailing this way, too. His name was Joshua Appelby, born Dec. 5, 1770 in Newport, Rhode Island. Like Captain Housman, he arrived in the Florida Territory circa 1822. As a point of comparison,…

Upper Keys historian Brad Bertelli made a recent public claim about local history that contained many errors and omissions that need clarification. I guess Brad was using his creative writing skills. Yes, the Upper Keys Historical Preservation Society (HPSUK) was formed in 1976 by a small group including Irving Eyster, which Brad omitted. Darlene Brown…