Staff with Florida Department of Economic Opportunity recently outlined a proposed new rule as part of the agency’s Monroe County oversight under the state Area of Critical State Concern law.

On Tuesday, the Monroe County Commission wants to hear what people in the Keys think about the suggestion. “Right now is the time to start taking public input so the county commission can formulate its own position,” county Growth Management Director Christine Hurley said Friday. The county’s public comment on the state recommendation tentatively is scheduled for about 10:30 a.m. Tuesday at the Harvey Government Center in Key West as part of the monthly board meeting.

If eventually adopted, the DEO report says, hoteliers would be required to buy “three vacant, buildable, environmentally sensitive platted residential lots” for every new room under the 300-unit allocation. Purchased lands then would be stripped of development rights and turned over to a conservation program. A major reason for the proposal is to take developable property off the market before the limit of residential building permit allocations runs out, which could occur by 2023.

Owners of buildable lots who do not get building permits could then file property “taking” lawsuits against the county and the state. “There will likely remain nearly 8,000 vacant parcels in need of acquisition by 2023,” the state report says. Hurley said, “The good news from the county’s perspective is that for the last three years, we’ve been knocking on Tallahassee’s door and saying we need to step up land acquisition down here to acquire developable property.”

Under the county’s rate-of-growth ordinance adopted as part of Critical Concern mandates, unincorporated Monroe County and Islamorada have not issued new hotel-room building permits in nearly 20 years. Marathon received a special state allocation of 100 new hotel-room units in 2012 as an economic-relief measure.

“Hotel developers in the Florida Keys have advised the [Department of Economic Opportunity] that because of the value of hotel rooms and because of the limited number of allocations available under the program, the program should be financially feasible for them,” the agency said. Purchasing three developable vacant lots has been estimated to cost around $120,000.

“There is a high occupancy rate [of 80 to 88 percent] of the existing hotel units with an average daily rate of $247 per room,” the state report says. “Recent transactions of hotel sales in the Florida Keys demonstrates a value of $634,000 to $708,000 per room-unit.” The proposed 300 hotel units should not affect the Keys hurricane evacuation time of 24 hours — legally required by state law — since visitors at hotels would be required to leave before the main evacuation period.

After public comment is received at the local level, county commissioners likely will work on their own position in early 2016, Hurley said. 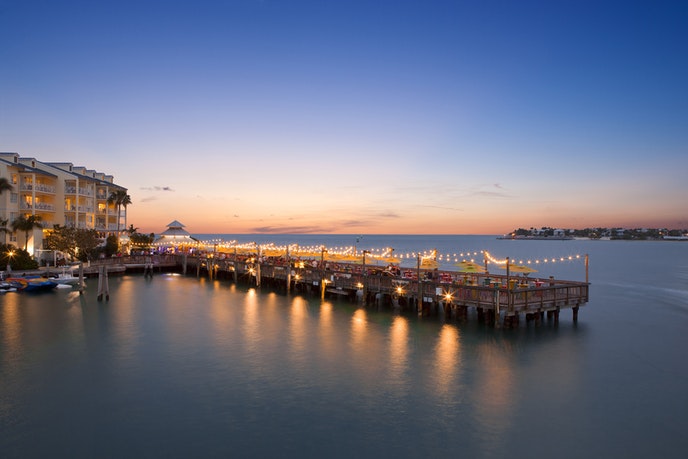 These Florida Keys hotels are blessed with warm sunshine, fresh seafood, and stellar beaches—and are the perfect passport-free alternative to the Caribbean. A Caribbean getaway can mean good things like relaxing on an island, soaking up the sun, and swimming in clear blue water. But it can also mean long flights, passport hassles, and endless customs lines….

The first new full-service resort in Key Largo since 1993 has opened its doors. Playa Largo Resort & Spa, a Marriott Autograph property, opened about nine months behind its original opening date. Prime Hospitality and Shaner Hotels broke ground on the 14.5-acre property in early 2014. The 144-room resort, at 97450 Overseas Highway, is on the bay…

In an attempt to lure KZK Productions, the company behind the Florida Keys-based Netflix series “Bloodline,” back to the area, the Village Council has agreed to waive future permitting and location fees associated with shooting. At the June 30 meeting, Mayor Deb Gillis brought forward the idea (Return of Bloodline) after speaking with Rita Troxel,…

Following a lengthy legal battle, the Islamorada Publix has resubmitted plans for its proposed grocery store development on Upper Matecumbe Key. These include a demolition permit as well as a building permit for the mile marker 83.2 property. Village Planning Director Cheryl Cioffari said the documents are currently being reviewed by all departments. If submitted…