Spectators applauded as the two-and-a-half-year-old twins were returned to an area with open-water access to Florida Bay. Each was fitted with a satellite tracking transmitter, tethered by a break away belt, to ensure the marine mammals are monitored and thrive.

“Their body condition will be checked and they’ll be looked at and tracked to make sure that the progress is smooth,” said Dolphin Research Center’s Mary Stella. 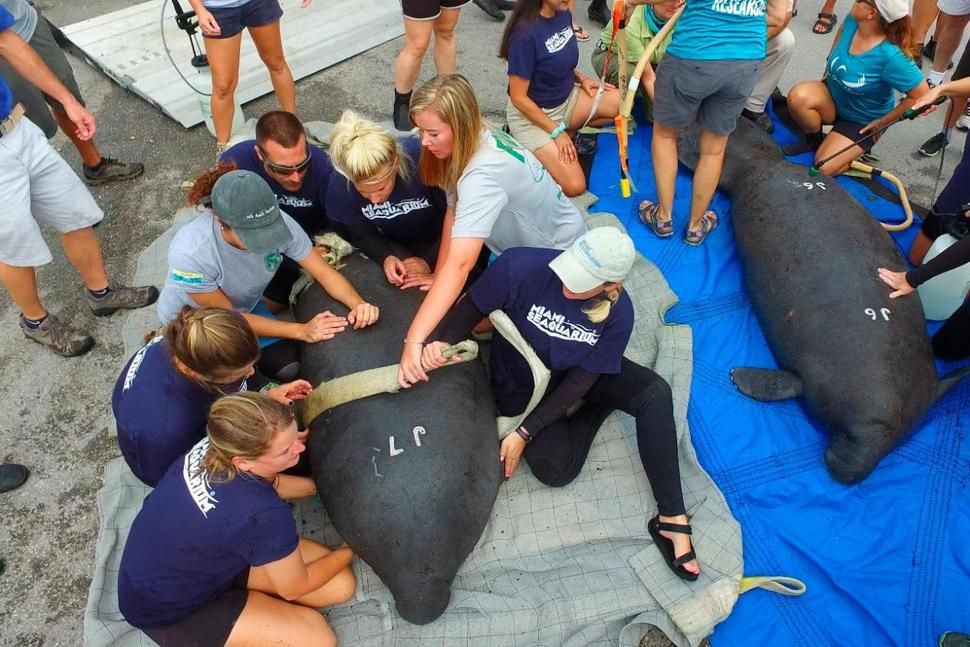 The twins were rescued after their mother “Bonnie” died from a boat strike in October 2016. When they were recovered, the calves weighed about 100 pounds each. Today the young manatees weigh about 600 pounds each.

“Every manatee life is precious,” Stella said. “These two are the offspring of a very well-known manatee named Bonnie that Dolphin Research Center and other people had been helping for many years.

“So when she was killed by a boat strike, the fact that we were able to help her twins, get them to safety, now that they are grown up and are ready to be released and can help support their species … it means a lot to the species and it means a lot to us,” Stella added.

Manatee calves usually stay with their mothers for one to two years.

Twin manatees are extremely rare, making up less than four percent of all births.

After their rescue in the Keys, the manatees were moved to Miami Seaquarium and subsequently transferred to the Columbus Zoo and Aquarium for full rehabilitation. Zoo director emeritus Jack Hanna participated in the release.

Dolphin Research Center team and the Florida Fish and Wildlife Conservtion Commission were called to rescue orphaned manatee babies. They were the twins of Bonnie, one of the most well-known manatees in the area. We first assisted Bonnie more than 20 years ago when her pectoral flipper was severely entangled in discarded fishing line. Over the years, she needed help several times – including at one point the partial amputation of a flipper and a lengthy rehabilitation at the Miami Seaquarium.

It was vitally important that she receive all this aide so that she could continue to live her life, producing and raising multiple offspring to help bolster the population of this endangered species. By all accounts, she was a terrific mom. After her death, officials discovered that one flipper was so entangled and the mammary gland beneath it infected so that her babies could not nurse from that side. Even with only being able to nurse from a single teat, she was raising two robust calves.

Bonnie’s life came to an unnecessary, early end when she was hit by a boat. Too often, boaters are in such a rush that they ignore posted manatee speed zones and strike these gentle giants before they can get out of the way. She was the ninth manatee fatality in the Florida Keys in this calendar year. These deaths are preventable if only people are more careful and responsible on the water.

As winter approaches, we see more manatees arrive in our warmer Keys waters. We also welcome more seasonal residents and visitors, which means a greater number of boats in action. We need to increase our awareness and do more to protect, not imperil, the manatees with whom we share our surroundings.