Chris Burgess, a volunteer with the Student Conservation Association, uses a high-pressure hose to clear a space beneath a North Key Largo tree in a pilot program to create potential nesting areas for endangered Key Largowoodrats. A pilot project under way in the Crocodile Lake National Wildlife Refuge uses a high-pressure water hose to clear space amid tree roots and among boulders in North Key Largo’s tropical hardwood hammocks.”We’ve installed 27 ‘nest cavities’ thus far,” said refuge manager Jeremy Dixon. That’s more than half the 50 new habitats planned in the test phase. “A remote camera placed at one of them already [photographed] a Key Largo cotton mouse and a male Key Largo woodrat visiting,” Dixon said this week.

Key Largo woodrats have been federally listed as an endangered species for more than three decades. The protected rodents, strictly vegetarians that avoid humans, can be found only in the woods of Dagny Johnson Key Largo Hammock Botanical State Park and the Crocodile Lake National Wildlife Refuge.

Refuge staff and volunteers have built more than 750 “supplemental nest structures” as manmade woodrat habitats over the past decade. The most common design uses black culvert pipe, cut open at the bottom and covered with pieces of coral rock. Woodrats now occupy many of those nests, which the rodents adorn with an array of sticks. “They can’t help themselves,” Dixon said. “Evidence clearly suggests that [manmade nests] have significantly bolstered the Key Largo woodrat population,” says a U.S. Fish and Wildlife Service report.

The new design of the recently launched test project opens a more natural space beneath trees and rocks on the conservation lands, using pressurized water from a tank truck. “The tropical hardwood hammock should have numerous cracks, fissures and voids in the topsoil and hummus layer that would serve as nest cavities for [woodrats], on top of which they would have built stick nests,” says the program summary. However, early agricultural development and later development activity flattened much of the area, altering the natural landscape.

Using a small nozzle, a worker can hollow a space of one or two square feet beneath a suitable tree or among boulders. Creating at least two openings allows woodrats to escape predators. Rocks placed at the openings allow rodents to slip inside but keep larger animals out. No existing animal nests are disturbed, and some notably large trees are avoided. “This method has the potential to rapidly create many nest cavities in a short amount of time,” says the summary, “with the added benefit of not adding foreign materials to the natural habitat.”

Other native animals also may take up residence in the cavity nests, Dixon noted. The cavity nests, each carefully plotted and tagged, will be monitored for a year or two to see whether woodrats make them a home.

“You broke my heart, ‘cause I couldn’t dance; you didn’t even want me around; and now I’m back, to let you know, I can really shake ’em down. Do you love me now that I can dance?”  (Lyrics from the 1962 Contours’ song “Do you love me?” written by Motown’s Berry Gordy, Jr.) What does the…

Want to get to know Key West wildlife? (And no, we’re not talking about nightly festivities at Sloppy Joe’s on Duval Street.) If you’re the kind of person who always puts the local zoo on your travel itinerary, or who fumbles over your camera every time a squirrel or lizard make an appearance during vacation,…

Jackson Landers grew up in a vegetarian household. Now he hunts and butchers much of his own meat. In the past five years, he’s focused on hunting and eating invasive species. In his book, Eating Aliens: One Man’s Adventures Hunting Invasive Animal Species, the 35-year-old Landers chronicles his travels around the country as he learns to hunt,… 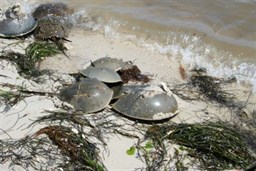 The Fish and Wildlife Research Institute is asking the public to report observations of horseshoe crabs mating activities in order to help biologists identify nesting beaches around the state. Horseshoe crabs can be found in the United States from Maine to Florida. Adult horseshoe crabs are usually found offshore, but they mate on sandy beaches…