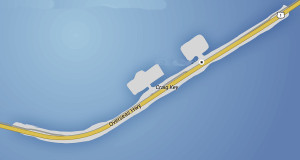 Craig Key is an island in the middle Florida Keys at MM 72 between Lower Matecumbe Key to the NE and Fiesta Key to the SW.

Craig Key was originally named Camp Panama, and was not a natural island, but a wide spot of fill on the Overseas Railroad right-of-way. The two islands on the Bayside came along later when more space was needed. The island to the southwest (south)  was dredged and filled in about 1955 by local contractor, Alonzo Cothron. The other island to the northeast (north) was made by Floyd Lambert of Marathon some time later.

Roland W. Craig leased the island from the railroad in the early 1930s, and by 1935 the island had been named Craig, Florida. The name of the town was officially changed to “Craig Key” in 1971.