A temporary interim rule put in place by the Coast Guard early last year that limits the required number of times the Snake Creek Bridge will open in a day is expected to turn permanent this month. The trial period, which began in March of last year, limits the bridge openings to once every hour, if needed, between 8 a.m. and 6 p.m. “The rule has been written,” Mike Lieberum, chief of bridge operations for the Coast Guard’s District 7 region, told the Free Press last week. “And I seriously doubt it will change.” However, he pointed out that Rear Admiral Scott A. Bushman, who oversees the district, which covers much of the southeastern United States and Caribbean Basin, has the final say-so on the matter. The trial period ends Tuesday, May 10, but Lieberum said the new rule would more than likely already be in place by then. 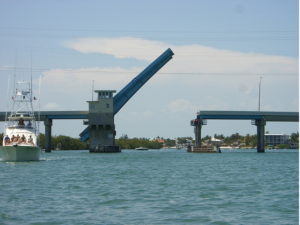 The bridge, previously, opened at 30-minute intervals when needed. But the Village Council pushed the Coast Guard for the change as a way to combat the lengthy traffic delays on U.S. 1 caused by the more frequent openings, especially during heavy tourist periods such as holiday weekends. “It’s good that the local politicians brought this to us,” Lieberum said. “It’s beneficial.” The factors taken into account on whether a rule change was needed, according to Lieberum, included boat/vehicle traffic effects, impacts to the surrounding community such as marinas/ restaurants and submitted public comment. Chief Petty Officer Jason Herbert, with the Coast Guard sector in Key West, said of the couple hundred public comments received only a handful were interested in returning to the 30-minute intervals. Most seem satisfied with the new rule, according to paperwork online.

Related Post  Family Friendly Things To Do in the Florida Keys

Herbert said discussions to start the daily bridge openings at 7 a.m. were also held, but such an earlier start could potentially delay school buses on their morning routes. He said spacing the intervals out further than an hour was also considered. But that, they felt, was too much of a burden on boaters. The bridge is owned by the Florida Department of Transportation but managed by the Coast Guard, which has a sector station on Snake Creek. The bridge tender is contracted by FDOT.

At a recent village meeting, it was suggested by a resident, and agreed upon by Councilman Mike Forster, that Islamorada might also look into pressuring those in charge of enforcing the penalties — upwards of $25,000 — for boats that cause unnecessary bridge openings by not laying down their outriggers when traveling through Snake Creek Bridge. “This is a problem that could be addressed,” Forster previously said. Lieberum said if unnecessary openings are occurring, it would lie on FDOT to report them to the Coast Guard, which would then do a follow-up with the vessel’s owner to investigate. The Snake Creek bridge structure has a 27-foot clearance in the closed position and is the only drawbridge in the Florida Keys.