Stonecrabs like their water stirred. The Stonecrab season opens Monday. Prices aren’t set yet, but experts expect $20 to $40 per pound, depending on claw size.

And this year, in anticipation of Monday’s Stonecrab season opening, we’ve dealt with toxic blue-green algae problems, a historically long-lasting Red Tide and Hurricane Michael poised to wreak havoc on the Panhandle. A disaster for crabs, right? 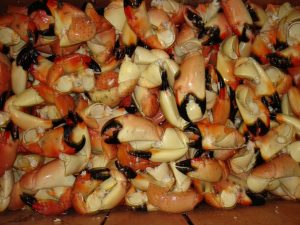 Many attribute last year’s strong start to Hurricane Irma, which hit about a month before the season opened, churning up the water and making it silty, just the way crabs prefer when they are ready to walk around in search of food. Crystal-clear water leaves them too vulnerable to predators and they stay buried and pine for the cover of dirt.

“The storm will mean that there’s rough and dirty water out there that will hopefully make them crawl and look around for food,” said Kris Sahr, owner of Offshore Seafood. Sahr used to have 3,000 traps in the Tampa Bay area but now buys and sells from crabbers, crabs he mostly sells to Crabby Bill’s restaurants.

Scientists don’t agree on what will happen after the storm. Some say it’s likely to break up the Red Tide. Others predict the hurricane will simply move it around. Sahr is counting on the former.

“It’s a blessing in disguise,” he said. “We need the water cooling down and the shorter days — Red Tide feeds off warm water and sunlight.”

Until Michael’s track was firmer, he said, most seafood industry experts anticipated that stone crab hauls from Fort Myers up to Egmont Key were unlikely to be strong because of Red Tide. An average season’s haul is somewhere around 3.7 million pounds of claws, valued at $27.8 million. Last season’s haul was a measly 2.1 million pounds.

“The crabs are smart. They run from Red Tide; they are pretty resilient,” Sahr said. But it’s still complicated. Many of the crabbers are hedging their bets and putting only half of their traps out. If the storm is fierce, better to only lose half their equipment, even if the crabbing looks good. 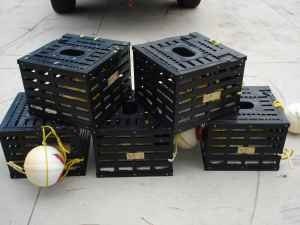 Crabbers started putting traps out Friday and spent the last two days trying to retrieve many of them, said Tommy Shook, general manager of Frenchy’s Seafood.

Florida is responsible for 99 percent of stone crab landings in the United States. It’s among the state’s top four most valuable fisheries, behind spiny lobster, red grouper and shrimp. There’s a psychology to the price of stone crabs, Shook said. Too steep and consumers are turned off.

“When it gets too expensive, people go back to eating lobster and shrimp.”

In the Florida Keys, where the bulk of the stone crabs are from, things should be normal following a normal lobster season. But what happens elsewhere in the state has the power to set pricing for the beginning of the season.

“From what I’m hearing, it doesn’t sound too good from Fort Myers past Sarasota,” said Gary Graves of Keys Fisheries in Marathon, a key supplier to Joe’s Stone Crab. “Pretty bleak. And from Tampa to St. Marks, this storm could destroy what traps are in the water. We don’t need extremely high prices. It’s not good for consumers or for us.”

Because hauls have been disappointing the past few years, many local crabbers have gotten out of the business.

“A lot of guys have gone on to do other things like drywall or cut lawns or fish for other products,” said Matt Loder, CEO of Crabby Bill’s restaurants.

While Loder used to rely primarily on crabs from the greater Tampa Bay area, he’s had to expand his reach from down to the Keys and up to Homosassa. He thinks many crabbers near the path of the storm will wait to put out their traps until after it has passed, a move that could mean a scarcity for the opening of the season.

For Shook, who has been in the business since 1978, this is a classic game of planning for the worst and hoping for the best.

“We looked at some traps here and we had some crabs in the traps after a two- or three-day soak. But, good lord, come Monday I’m going to have a line of people wanting to eat stone crabs.”

The lowdown on Stonecrab season 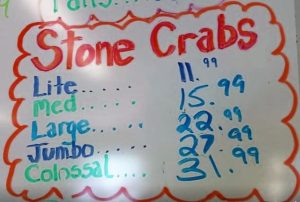 Price: The season’s first retail stone crabs will be available to consumers Monday afternoon. Until the first boats come in with crabs, purveyors and restaurateurs don’t set firm prices. In general, experts say the season’s pricing starts where last season’s ended, which in this case means sky high, about $20 to $40 per pound depending on size. The season ends May 15.

How to eat: For retail sale, stone crabs are always cooked and can be served cold, traditionally dipped in a mustard sauce, or heated and dipped in melted butter. To heat cooked claws, plunge them into boiling water for a few minutes or steam. Do not cook for long or they will get rubbery and might stick to the shell.

The Florida Department of Agriculture and Consumer Services recommends fresh-cooked claws be stored for three to four days packed in ice or in the coldest part of the refrigerator. Claws that are free from cracks in the shell can be frozen for up to six months. Thaw them in the refrigerator for 14 to 18 hours depending on size. Do not run water over them to thaw, or they will lose flavor.

Source: No claws for concern? Hurricane Michael could be good news for stone crab season.