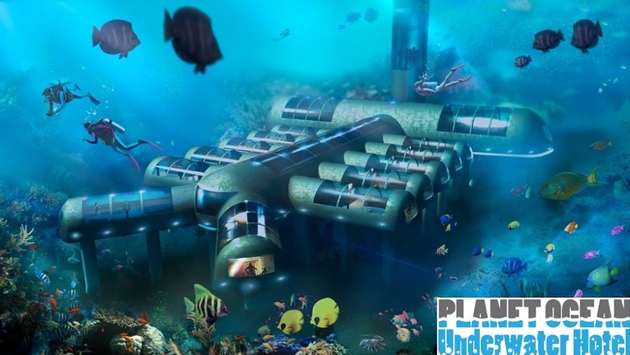 Just in time for World Oceans Day, an underwater luxury hotel still in the planning and fund-raising stage, is now featuring a single underwater guestroom, with proceeds going to a coral reef restoration funding project. Planet Ocean Underwater Hotel, based near Key West, Florida, highlighted the concept on Monday. The pod-style room, which is accessed via an underwater elevator, includes a “King Neptune” bed, a bathroom with a shower, an Italian leather love seat, an HDTV, air conditioning, adjustable LED lighting, underwater Wi-Fi and room service, according to the hotel’s website.Oh yeah, and it also offers a panoramic view of the ocean surrounding you.

The hotel, which is exploring several locations across the globe, is calling itself “the world’s first fully functioning underwater hotel.” Since September, it has been collecting applications from celebrities to be the first guests in the hotel, claiming in a press release that it will pick “100 environmentally responsive celebrities,” “men and women (who) have made a name for themselves as spokespersons, envoys, and emissaries of good will – persons of conscience who have put their integrity on the line, by making a personal contribution, commitment, or donation.”Others have used their influence, dynamism, or discrete energy to engage in activities that have brought not only attention to, but in some instances reparation to the near devastation of our coral reefs and marine life. The importance of this work is only secondary to that which is needed as we consider the current omen of global destruction to Planet Ocean.”

The hotel—founded by Tony Webb (who personally funded a 13-year space tourism project, and is a major sponsor for the international Google Lunar X-Prize team SYNERGY MOON)—will donate a portion of its profits to the Global Coral Reef Alliance, a non-profit organization that partners with communities around the world to protect and foster the growth of coral reefs. The hotel is particularly interested in Biorock Technology, which has shown strides in rebuilding damaged coral reef populations. In fact, just 100 yards off the coast of Lauderdale-by-the-Sea, lies the highest live coral cover in Florida, created via Biorock Technology.

“The inspiration for the Planet Ocean Underwater Hotel project is that I wanted a dramatic, fun, engaging way to draw much-needed attention to the unwarranted and preventable destruction of the world’s precious coral reefs and other endangered marine resources and natural assets,” said Webb, via a release. “What better way than to invite people to come and experience the enchantment of these underwater treasures and the glamour of the hotel first hand?”  Webb added: “So many celebrities have already voiced their commitment, and now we challenge them to use their status as a public figure and allegiance to our planet as a platform for making ours a better and more beautiful world. There is always strength in numbers, and all it takes is awareness and a willingness to do the right thing. Individually we are all small, regardless of our status. But together we can move mountains, or in this case, restore underwater reefs for the benefit of many generations to come. ”Seventy-five percent of the world’s coral reefs are currently threatened by local and global pressures, according to a comprehensive analysis released by the World Resources Institute, along with the Nature Conservancy, the World Fish Center, the International Coral Reef Action Network, Global Coral Reef Monitoring Network, and the UNEP-World Conservation Monitoring Center, and a network of more than 25 partner organizations, including NOAA.

Local threats such as certain fishing practices, coastal development, and pollution are particularly dangerous. Left unchecked, the percent of threatened reefs will increase to more than 90 percent by 2030 and to nearly all reefs by 2050.