There are few more exciting finds while snorkeling or diving than to see the graceful swimming of the Spotted Eagle Ray. This interesting animal is found in tropical and other warm waters in coastal areas. In the Florida Keys, we see them swimming atop the coral reef or in our bays and nearshore waters. They’re an animal easily recognized with their large dark bodies and spotted skin. A spotted eagle ray’s “wingspan” can be 9 feet from fin to fin. When you include their tails, that can stretch to 16 feet long. Spotted eagle rays have mouths with crushing plates located in the bottom of their bodies. Their diet consists of clams, oysters, shrimp, octopus, squid and urchins. 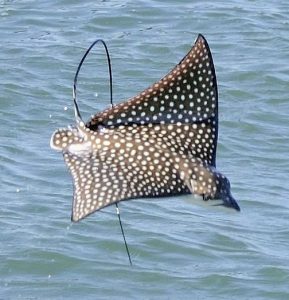 Like sharks and other rays, their bodies are covered in dermal denticles, which are scales. These scales overlap closely together, which causes the rough, sandpaper-like texture of their skin. Also, like other rays, spotted eagle rays have a venomous barb on their tails. These barbs are used for protection and are made of keratin, the same material that makes up our hair and fingernails. As a defense mechanism, the barb will be used by breaking off in the skin of a potential predator; however, it will eventually grow back.

Spotted eagle rays may school together in large groups and will also jump out of the water to avoid being eaten by a predator. Sharks will try to catch and eat them, but that can be difficult with the speed of the eagle ray. Spotted eagle rays are protected under Florida law, but in other places, they are considered to be a delicacy. Here, they may be caught as by-catch — animals caught as by-catch are animals that anglers catch but aren’t targeting for harvest. By-catch includes other fish species but can also include sea turtles, dolphins and other marine life.

Scientists at Mote Marine Laboratory are studying the population of spotted eagle rays. If you see one of these animals out in the water, report it on their website at mote.org/eagleray. Citizen scientists, like you and me, can make a big difference in helping better understand our oceans and marine life. Getting out to the reef and in the water gives you the best chance of seeing a spotted eagle ray in the wild.

Book a snorkel, scuba or glass bottom boat tour to have the chance to see many of the animals that call our ocean home. If you are snorkeling or scuba diving, remember to go slowly and look carefully to get the most out of your underwater adventure. Plan your excursion in the real Florida by visiting floridastateparks.org.