A comprehensive book, written by a longtime Sanibel resident, which sheds light on the Florida American crocodile, has hit the shelves a month early.Author Charles LeBuff will sign copies of his book Florida’s Crocodile: Biology and History of a Threatened Species

from 11 a.m. to 2 p.m. Thursday, Dec. 14, at MacIntosh Books and Paper, 2330 Palm Ridge Road. “Florida’s Crocodile,” is a limited edition.”This is the first book exclusively about American crocodiles,” he said. “The guy who wrote the forward (Joseph Wasilewski) he compared it to a book that was written on alligators back in 1935, which is a classic. There is a lot of stuff in here that has never been published before.” 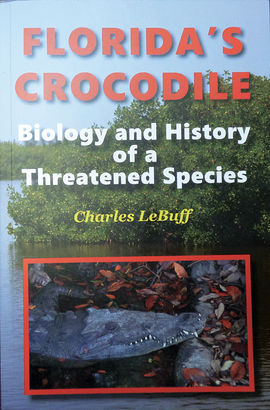 The book reveals a great deal of LeBuff’s research, as well as anecdotes of his personal interaction with crocodiles. Although the book focuses on crocodiles, there are some comparisons when talking about nesting behaviors, jaw pressures and bites to alligators.

Two years ago LeBuff wrote a scientific paper on the history, status and the range of the American crocodile along the Florida gulf coast.

“In 1957 I wrote a paper that is fairly close to the same title. I got to thinking one day I should bring that up-to-date. So, I wrote this paper and I submitted it to the Florida Museum of Natural History Bulletin and they accepted it two years ago. Well, that got my juices flowing,” LeBuff said. “I thought to myself there is really not any book about the American crocodile in English anywhere that is devoted exclusively to crocodiles.”

That lead to working on a manuscript. It was published as an ebook first, which garnered some complaints from people that it was not available in paper, leading to the paper edition.

The love of crocodiles stemmed from LeBuff working with the species as a youngster at the Everglades Wonder Gardens in Bonita Springs. The crocodile grabbed his attention because they were unique.

“I was hired there as a guide, an interpretive naturalist. That was my first real paying job in the wildlife field,” he said. “I stayed there two different stents for a total of six years and then I was hired by the Fish and Wildlife Service in Naples before being transferred here (Sanibel island) in 58.”

While at the Everglades Wonder Gardens he was in charge of the crocodile propagation program. Back in those days they were interested in increasing their collection, so they recovered eggs that were laid. LeBuff was in charge of feeding the offspring until they could eat on their own.

“I watched them grow and measured them,” LeBuff said, which eventually turned into a collection of 15 foot long crocodiles that impressed him.

After arriving on Sanibel, and working at J.N. “Ding” Darling National Wildlife Refuge, LeBuff saw his first wild crocodile in 1980. The crocodile made an appearance at the refuge a year earlier and was photographed by a tourist, before George Weymouth, Sanibel naturalist, and LeBuff photographed it the following year and documented it.

“There were some years it wasn’t seen,” LeBuff said of the 30 years it called “Ding” its home. “It died in 2010 during that cold spell. That same cold spell killed about 200 crocodiles in south Florida.”

The crocodiles are slowly recovering, he said, adding that as long as people can learn how to coexist with them they will do fine.

“One of the problems is people fear crocodiles more than alligators. But, they are actually less dangerous than alligators are. They are timid, shy and generally stay away from people. Like any animal, they will accumulate to people and adjust.”

LeBuff spent 32 years at “Ding” Darling as a refuge biologist, which was more than 26 years ago. He published his first piece about the reproduction of the smooth green snake in a journal when he was 14 years old.

The love of animals, which began when he was very young, eventually resulted in an internship at the Boston Museum of Science as a teenager. LeBuff also had the opportunity to intern at the Museum Comparative Zoology with the curator of herpetology at Harvard University.

When his family moved to Florida, his work with wildlife continued at Everglades Wonder Gardens.

“I still go out collecting snakes, hunting pythons and frogs just like a little kid would,” LeBuff said. “As a young person we all loved turtles and some of us never out grow it, which is what basically happened to me.”

Get you copy here now Florida’s Crocodile: Biology and History of a Threatened Species