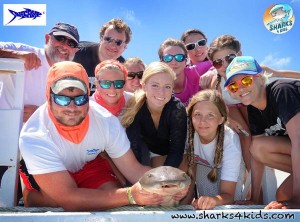 Students encountering sharks has been a tagline for cheesy horror flicks over the years. It became a reality recently when Newfound Harbor Marine Institute at Seacamp and Sharks4Kids Inc. hosted six female students from Sugarloaf Middle School for its “Young Women in Marine Science” program. The two-day experience held at Seacamp on Big Pine Key was part of a Science, Technology, Engineering and Math program to give students the chance to participate in an ongoing shark research project. While demonstrating the activities and challenges of a career in marine biology, the program also offered the girls first-hand experience in lab and field research.

The program was coordinated by Dr. Jeff Carrier, a retired biology professor from Albion College and a shark biologist with 40 years of research in the Keys.“One of the things we wanted to demonstrate with this program is marine science is a field open for everyone,” he said. “I’ve seen positive changes but it’s still an issue of access for women to get into the science-related fields. If you have the drive and motivation for it, it doesn’t matter if you’re male or female.” Carrier was joined by Dr. Derek Burkholder, a research scientist with the Nova Southeastern University, Guy Harvey Research Institute and Save our Seas Shark Center, as well as Jillian Morris, founder and president of Sharks4Kids, and Duncan Brake, a photographer and videographer. Also collaborating was Sugarloaf teacher Alena Leipzig, who identified and selected the students taking part in the program.

The sessions began with an introduction to the fundamental aspects of shark biology, designed to familiarize the students with the animals that they would encounter. In addition to basic biology, the students learned about the roles of sharks in the ecosystem. Following these sessions, staff demonstrated how sharks that are captured in the study are measured, assessed for overall health and tagged. “Before this experience I thought marine scientists only observed organisms in the lab,” said Ciara Miller, one of the students. “I would consider a field in marine science. I like the hands-on approach. I also love the location that I live in and I feel it would be easy to study marine science here.”

Each student was presented with her own nurse shark to direct the tagging process. Lengths and weights were measured, sex was determined, dorsal fin tags and internal microchip tags were applied, tissue samples were taken for DNA analysis, and the sharks were released.The following day was devoted to fishing for nurse sharks. All animals were assessed, tagged and released back where they were captured. Strangely enough, one of the sharks tagged by the students the day before was recaptured. Carrier said a couple of the students started the program with a fear of sharks, but in time their perceptions changed. After handling the animals, he said they developed an understanding of the sharks’ roles in the ecosystem.One of the students, Brooklyn Helm, said she was able to learn a lot about the creatures during her time in the program. “This experience showed hands-on application to marine science and made me think of reasons why sharks are not scary and why there are so many misconceptions.”

Source: Students get out on the water with sharks | KeysNews.com