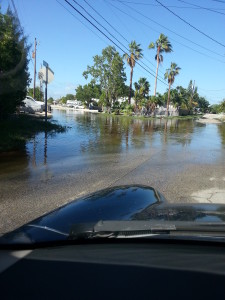 Flood-prone neighborhoods could soon rise higher on the road repaving list after county officials told staff last week to make them a priority.

At the Oct. 21 Monroe County Commission meeting in Marathon, Kevin Wilson, assistant county administrator in charge of Public Works & Engineering, was given a clear direction to address the flooding in Key Largo.

“In fact, I had told Kevin prior to the meeting this was coming up for discussion,” said Commissioner George Neugent, “because I was now getting calls from people in the Key Largo area. There are two or three areas that have been inundated for long periods of time. I didn’t know if Kevin had direction in making this a priority.”

When it came to the point in the meeting where Wilson was talking about upcoming road projects, he was asked by commissioners what was being done about the flooding. Wilson indicated that it wasn’t at the top of his list, but he would reprioritize if given the direction.

“Kevin got clear direction from the commission that we had to come up with some direction as soon as possible and implement the solution,” Neugent said. “The solution will be elevating roads and hopefully finding some form of drainage.”

Commissioner Sylvia Murphy said Wilson was asked to look into the feasibility of adding the current flood areas to the criteria that lets staff determine which roads are the most in need of repair.

“We did get clear direction to make tidal flooding a prioritization for which roads we work on next,” Wilson said. “Right now, we are already working on reprioritizing the paving projects in the Upper Keys and modifying the scope to take into account what we’ve learned about the tidal flooding and future expectations. One of the things we’ve gotten better data about in recent months is the effects of climate changes on nuisance flooding.

“In some cases we will raise the level of the roads. At the same time, you have to add appropriate drainage. Each road is a little different, and that’s why we have designers looking at it. We’ll update [the commission] on where we’re at in December.”

Although the waters have receded a bit after almost a month, Twin Lakes resident Frank Garces says there is still some tidal water on the streets in his neighborhood, which along with Stillwright Point was one of the most inundated areas.

The September floods were due to “an event where the moon, autumnal equinox and weather all converged at one time to create an extremely high tide,” according to Rhonda Haag, county sustainability director. The problem was compounded by strong winds from storms and Hurricane Joaquin, which stacked up water in Florida Bay, she said.

More coastal flooding is possible this week due to another extreme high tide, local officials have warned.

Residents of the areas flooded in September were so frustrated at having to drive their cars through saltwater that they took their anger public, contacting county officials and even posting pictures of the flood on Facebook. Garces created a Facebook page called Key Largo Community Swamp.

And it appears the county commissioners have been paying attention.

“Funding should not be an issue,” Neugent told the Free Press. “We have infrastructure sales tax dollars to deal with that. We may have to rearrange priorities, and to me this is a clear priority when our residents are not able to get to their house on a county road. To me, that moves to the top of the list of things that need to get done.”

Garces, who attended the meeting, said, “the board of commissioners was very receptive to our concerns. Our fight isn’t over, but we’re very happy we’re being heard.”

“We’re all thrilled about it,” said Kathy Snow, another resident of Twin Lakes. “We’re all very confident based on the info we received from folks that attended the meeting.”