The fearsome screwworm is back. Federal officials have identified a small outbreak of the insect, also known as the New World screwworm fly (Cochliomyia hominivorax), in a population of deer and possibly some pets in Big Pine Key, Florida. 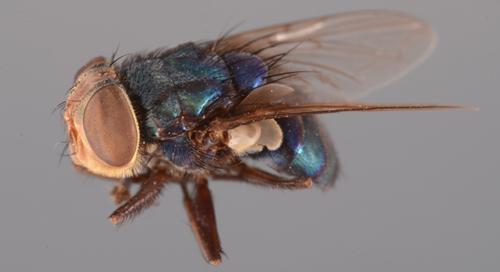 The United States Department of Agriculture’s Animal and Plant Health Inspection Service confirmed that the pest has infected at least three and likely many more key deer, an endangered species that only lives on Big Pine Key and nearby islands. Local companion animals also show signs of infection, the Florida Department of Agriculture and Consumer Services noted in a press release on October 3.

In response, the state’s commission of agriculture, Adam Putnam, declared an “agricultural emergency” in Monroe County, and ordered that no animals be removed from the area. An unspecified number of deer have also been euthanized. This is the first time the screwworm has been found infecting animals in the United States in more than 30 years.

“The screwworm is a potentially devastating animal…that sends shivers down every rancher’s spine,” Putnam said in a statement. “I’ve grown up hearing the horror stories from the last occurrence” in the state of Florida more than five decades ago, he added.

The screwworm is particularly destructive because “unlike all the other blowflies in the New World, this fly goes after living tissue, not dead tissues,” says Phil Kaufman, a veterinary entomologist at the University of Florida. The adults lay eggs in wounds or broken skin, and the eggs grow into larvae that tunnel in a corkscrew fashion into the body, hence the screwworm moniker, Kaufman says. “That’s what makes this one really nasty.” The adults look relatively innocuous, with a metallic blue sheen.

Related Post  The Turtle Hospital Rescues Up Dramatically in 2015

The screwworm can infect any warm-blooded animal, even people, though human cases are rare. It’s primarily a problem for large mammals, such as livestock. Once an infection begins, the screwworm maggots eat muscle tissue and enlarge wounds, and if left untreated are usually fatal. After the larvae develop into pupae, they drop to the ground and develop into adult flies over the course of seven to 10 days, starting the life cycle again.

Fishing is a key component of the Florida lifestyle as well as the state’s economy. But fishing line and other fishing tackle frequently enter Florida’s aquatic systems as a result of incidental snags or improper fishing line disposal. When left in the aquatic environment, fishing line and tackle create potential traps for unsuspecting wildlife that…

The Florida Keys is an excellent place to see a wide variety of bird species. People flock to these islands from all over the world to get a glimpse at rare and unusual species that stop here during their migrations. We also have a great number of interesting birds that live here throughout the year….

Wild winds that whipped Florida Keys seas this week played havoc with boaters but may help keep Florida Keys reef corals healthy. “Water temperatures went down about five to six degrees in a week while we were doing [reef] surveys in the Middle Keys,” said Meaghan Johnson of The Nature Conservancy’s Florida Reef Resilience Program….

Visitors to the Florida Keys see them as robust shrubs and trees with large, round, fan-like leaves as big as your hand. They’re often seen in road medians, shopping center landscapes and impeccably landscaped yards. To the locals, they’re useful hedges and screens in yards, as well as important in preventing sand dune erosion. Sea…

Florida Bay, the body of water between the Everglades and the Keys that was once teeming with wildlife, may be on the verge of collapse. Last week, scientists reported that miles of sea grass have died in the bay in recent months, leaving behind a stinky smell and a cloud of yellow sulfide. The die-off is…