Mote Marine Laboratory is expanding its coral restoration efforts so that those who can’t make the 3 to 6 mile boat trek to the reef can see coral and the marine life it supports.

Mote has partnered with the state Department of Environmental Protection and the Florida Keys National Marine Sanctuary to bring 5,500 nursery-raised corals to a proposed snorkel park inside Fort Zachary Taylor State Park in Key West, according to Jason Wolf, who oversees Mote’s Protect Our Reefs license plate program.

The Monroe County Tourist Development Council has approved paying for half of the $248,000 in costs to plant the coral at the state park. The county commission will vote on final approval of the funding when it meets in October, Wolf and TDC staff said.

Wolf and Dave Vaughn, who oversees Mote’s lab on Summerland Key, said the snorkel park would not only allow beach-goers the thrill of diving on the reef and seeing tropical fish but educate them on the importance of coral reefs.

“The goal is to build interest in coral reefs and have people understand why they are so important and what role they play in the marine ecosystem,” Wolf said.

Mote plans to place a sign in the park detailing the importance of coral reefs, Vaughn said. 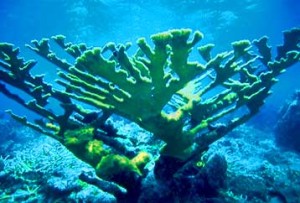 In the past five years, Mote has replanted more than 10,000 staghorn corals and 3,000 brain and boulder corals, Vaughn said. Mote has reared about 70,000 corals at its nursery off Looe Key.

Mote has begun to plant staghorn corals at three different reefs this year off Key West — Sand Key, Rock Key and Eastern Dry Rocks, Wolf and Vaughn said. Mote plans to plant 1,000 corals at each of those locations.

“We are really trying to expand our coral restoration efforts,” Vaughn said.

Money to fund the restoration projects also comes from the sale of the Protect Our Reef license plates. More information on the plate can be found on the Internet at reefplate.com