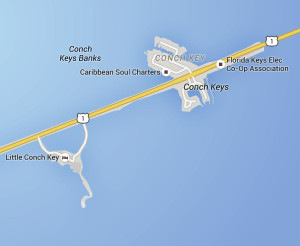 Conch Key is an island in the Middle Florida Keys at MM 62-63, between Long Key to the NE and Duck Key to the SW.

Little Conch Key, at approximately mile marker 62.2 was also known as Walker’s Island. Beginning in 1935, the site of a fishing camp for the Walker and Berner families of Miami.

Conch Key ocean side is an superb example of dredge and fill. It simply did not exist until it was filled – it was an excellent shallow water lobstering area. I know this as it was not there when I moved to Key West in 1947. So it joins the man-made parcels such as Trumbo Point, Key Colony Beach, the two bayside islands of Craig Key. Perhaps I should include the newly named Veterans Key south of Lower Matecumbe Keys – it is the remains of a bridge approach built by the World War One veterans.
Source: http://www.keyshistory.org/CK-Conch-Key.html