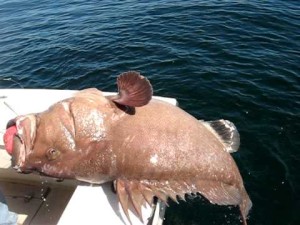 Federal fishery managers drew a one-square-mile block around the Warsaw Hole, a recognized fish-breeding site off the Lower Keys, as an area that needs protection.

Three boundary definitions, from one to four square miles, were proposed by council staff for Warsaw Hole, lying about 35 miles south of Key West. The council picked the smallest version.

“Council members want to reduce the impact on surrounding areas where boats may go for amberjack and other [deepwater] species,” said staff fishery biologist Chip Collier.

If passed on a final vote in December and then approved by the National Marine Fisheries Service, the Warsaw Hole zone would ban harvest of species in the snapper-grouper complex.

“However, fishermen would be allowed to troll for pelagic species such as dolphin, tuna and billfish,” says a council summary.

Fishermen could still target king mackerel in the area. “The mackerel fishermen “should not see any impact,” Collier said.

“Warsaw Hole is an area of critical concern,” says a federal study that lists Warsaw grouper, almaco jack, greater amberjack and several species of grouper and snapper as fish caught there.

“Warsaw grouper definitely aggregate there as accounts from the old-time Conch fishermen clearly indicate there must have been an aggregation based on the numbers they caught,” the study says. “Warsaw Hole may also be a spawning aggregation site for greater amberjack.”

The apparent success of protection at Riley’s Hump, another Lower Keys spawning site, was cited as a precedent for fishing limits at Warsaw Hole.

Six other studied areas, from North Carolina to Florida, were dropped as potential spawning management zones. Warsaw Hole, from about 190 to 225 feet deep, is the smallest of the five preferred sites.

Council staff will prepare additional information for the council’s expected final vote at its December meeting. No additional public hearings on the overall plan are planned.

The council accepts written comments on all issues through its website, www.safmc.net.