Why Catch and Release?

By adopting just a few simple habits, recreational anglers can greatly increase the chances that the fish they catch and release will survive. Practicing catch and release helps anglers to preserve marine fisheries while enjoying their outdoor fishing experiences. 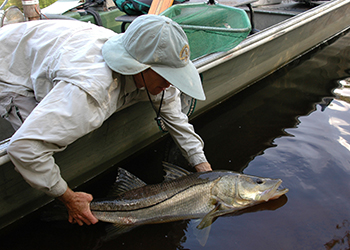 By adopting just a few simple habits, you can increase the survival rate of fish you catch with proper handling during the landing and release. This means you can positively influence the future of Florida’s saltwater fish populations, so strive for 100% survival of the fish you release!

Here is an interesting technique to return fish brought up for depth.

Explore the pages at the Source site below to learn more about successful catch-and-release fishing. Share the many valuable print and video resources with your fishing friends.