According to the HollywoodReporter.com, the third season of Bloodline, the twisted family drama starring Kyle Chandler, will be its last on the streaming service. The Sony Pictures Television-produced series was renewed in July, shortly after the second season debuted on May 27. At the time, Netflix told The Hollywood Reporter that it would not be the final season. 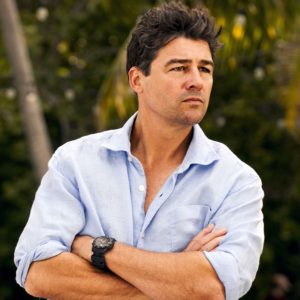 In another THR story (Source) they write the following. Netflix “isn’t immune to the unpredictability that’s made Hollywood a pretty crazy place for a century or so. Sarandos acknowledged during a recent THR roundtable that Stranger Things, which was spurned elsewhere but became a summer hit, was a “big surprise.”

A less happy surprise, it seems, was Baz Luhrmann’s musical drama The Get Down, said to have cost in excess of $120 million for 12 episodes. Despite generally positive reviews, the first six episodes landed in August almost silently. Production troubles are said to have strained Netflix’s relationship with its partner on the project, Sony Pictures Television (which shouldered some of the cost overruns).

Subsequently, Netflix cut the third season of Bloodline — another series on which it partners with Sony — from 13 episodes to 10. It also notified Sony that the show’s third season would be its last, though it had been anticipated that the series would have a fourth season.

According to this Miami Herald article. …although the third season of the [Bloodline] series will begin shooting this fall and air on Netflix in 2017 as planned, the saga of the Rayburn family will draw to a close earlier than expected. Daniel Zelman, who created “Bloodline” along with Todd A. Kessler and Glenn Kessler, said he had always envisioned the story playing out over the course of five or six seasons. The possibility exists that Sony Pictures Television, which produces the program, could shop the show to another network.

As I’m sure you are aware, there have been a number of shows that have been saved by huge fan support. This might be how Bloodline will survive. Some that were saved, or at least partially saved include:

If you ever want to head a campaign to save your favorite show, the one that kept Chuck on the air should be the first place you look for inspiration. The campaign—which was launched after the show received low ratings in its second season—involved a strong three-prong strategy that hit the minds, hearts, and pocket books of network executives.

Petitions and letter-writing campaigns were just the first part of the successful plan. Fans also started a “Have a Heart, Renew Chuck” program, which asked fans to donate money to the American Heart Association on behalf of NBC. By the time the effort ended, over $17,000 was donated to the charity.

Lastly, fans reached out to Subway, one of the show’s biggest sponsors, to help show that their financial support of the show was worth it. Fans organized to head to Subway to buy a footlong sub on the day of the second season finale and to drop comment cards at the restaurant saying they visited to support Chuck. This movement became so big that even the star of the show, Zachary Levi, participated by leading nearly a thousand fans to a Subway in England.

If there is one thing network executives love more than viewers, it’s money, so when Subway announced that it would become an even bigger sponsor of the show, it was pretty hard for the powers-that-be to deny the show a third season. Eventually, the show lasted a total of five seasons and won two Emmy awards and three TV Guide Awards.

After the second season of Star Trek aired in 1967, rumors began to circulate that the show was going to be canceled. Trekkers/Trekkies jumped into action, creating arguably the most successful letter-writing campaign in television history. Young fans even held protests at their schools. The largest was at Caltech, where 200 students marched from campus to NBC’s studio in Burbank carrying signs with such great slogans as “Vulcan Power” and “Draft Spock.”

NBC denied the cancellation rumors. In fact, after the March 1st episode, the network aired the following message: “And now an announcement of interest to all viewers of Star Trek. We are pleased to tell you that Star Trek will continue to be seen on NBC Television. We know you will be looking forward to seeing the weekly adventure in space on Star Trek.”

One season later, Star Trek was actually canceled. But the show thrived in syndication, even occasionally attracting more viewers on rerun nights than on the days the original episodes had aired. As the show continued to gain fans, eventually it inspired an animated series, many movies and spin-off television shows, and developed one of the most dedicated fan bases in geekdom.

If you’ve ever wondered how residents of a small town would survive after a nuclear war, then you should definitely check out Jericho. When you get to season two, thank the fans who kept the show on after one of the silliest campaigns to save a program.

When Jericho was canceled after its first season, the show’s fans—inspired by the main character shouting “nuts” during an epic battle in the season finale—sent over 20 tons of nuts to CBS studio executives, who then decided to review the show’s ratings. Network researchers looked at the numbers and announced that the show actually had quite a few more viewers than Nielsen reported because the show received so much online streaming and was viewed so often on DVRs.

As a result, Jericho was renewed for one more season, but when ratings still declined, it was canceled for good—even after a second “nuts” campaign. The show’s storyline was continued in a six-part comic book series though, which allowed creators to wrap up the plotlines. In fact, some fans call the comics the “third season” of the show.

With Bloodline star Kyle Chandler as the main character.

If networks actually find use for the things fans send in to help support their shows, then NBC must have really appreciated the campaign to save Friday Night Lights. That’s because fans hoping to save the show after its second season took the program’s name literally and sent the studio light bulbs—something everyone can find a use for (assuming they didn’t break in transit). Fans also sent in eye drops as a reference to the show’s motto “Clear eyes, full hearts, can’t lose,” although executives presumably found those less useful.

Fans also created positive PR for their cause with their “Save FNL Campaign,” which raised money to send troops stationed overseas 20,000 footballs and Friday Night Lights DVDs. Despite the show’s low ratings, the efforts proved to be enough to get NBC and DirecTV to work together on a cost-sharing partnership that kept the show on the air for a total of five seasons.

Arrested Development fans mourned the show when it was canceled in 2006. But its untimely end almost came much sooner. Fox almost canceled the series after its second season, which was cut from 22 episodes to only 18 due to low ratings. Fortunately, fans took to sending letters to the network and even sent executives crates of bananas, a tribute to the Bluth family business. Realizing there had to be some money in this banana stand, the network agreed to renew the show for one short season.

Later, Arrested Development was picked up by Netflix; there might even be a movie coming after that.

It’s almost like Fox hated Firefly from the start—the network barely promoted it, changed the time slot constantly, and aired the very linear story out of order. It’s no wonder the show never managed to get enough followers to stay on the air. Ultimately, Fox canceled it without even showing all 13 episodes.

Even though diehard “Browncoats” couldn’t save the show from cancellation, they kept writing Fox demanding the network release the show on DVD as soon as possible. When the DVD was finally released, they surprised everyone by buying so many copies that stores had a hard time keeping it in stock.

As a result of those massive sales, Universal Pictures offered Firefly creator Joss Whedon the chance to wrap up the storyline with a movie, Serenity (the name of the ship in the show). While Serenity didn’t do well in the theaters, it again scored high in DVD sales. In fact, it was Amazon’s best selling DVD the year it was released. Rumors of a Serenity sequel still buzz around the net here and there, but 10 years after the show originally aired on TV, it seems unlikely that Serenity will ever fly again.

After the end of its first season, the fate of this show about teenage aliens disguised as high school students—which debuted favorably but was plagued by low ratings—was up in the air … at least until fans launched an unusual campaign to save it. They sent the powers that be at the WB bottles of Tabasco sauce—a favorite condiment of the alien characters on the show. Thanks to the fans’ spicy support, Roswell was renewed for a second season on the WB, and made the jump to UPN for its third season, after which it was ultimately canceled.

I’m a big fan of many of these shows, but I’ve never actually participated in an effort to bring back a show from the brink of cancellation. If any of you have tried to save your favorite programs this way, please tell us about it. What did you do to help your favorite show? And were your efforts ultimately rewarded?