The owner of the Old Tavernier Hotel at mile marker 91.8 recently received approval to transform the former lodging into affordable housing. The Monroe County Development Review Committee gave the final go-ahead on the minor conditional use permit requesting the change at its Aug. 30 meeting. These type of requests do not require public hearings after the DRC, unless an item is challenged, in which case it would then go before the Monroe County Planning Commission. 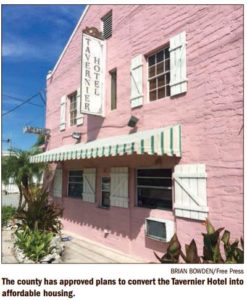 According to submitted floor plans, the property owner will create six affordable housing units and accompanying rooms in a dormitory-style layout from the existing one. The 18-room hotel building sits on oceanside property fronting U.S. 1 and is connected to the Café Moka coffee shop and one residential unit. Aside from the half-dozen upstairs units, the plans call for a library space, computer room, lounge, multiple study rooms and excess storage on the ground floor. The work would include tearing down some wall space to rearrange floor areas as well as adding new passageways. The coffee shop and current one residential unit, with improvements, would remain.

The property owner highlighted the building’s outdated amenities in comparison to other hotels and its historic status, which prevents exterior alterations, as reasons for vacating its current use. The old hotel dates back to when Tavernier was a thriving fishing camp. It has gone through a handful of owners over the years but always offered low-cost nightly rates compared to much of its competition in the Upper Keys.

The Old Tavernier Hotel is part of a complex that dates back to the community’s days as a fishing camp, when pineapples were harvested just up the road.

Originally built as a theater, the Tavernier Hotel was once the center of a shopping mecca envisioned and constructed by H. S. “Mac” McKenzie, who moved to the area from Miami in 1928 and went into business with the original Standard Oil man, O.M. Woods.

The Monroe County Property Appraiser’s records indicate the buildings were built in 1936, after the 1935 Labor Day hurricane. But Upper Keys historian Jerry Wilkinson says they were built several years earlier. In fact, Wilkinson says, the concrete-block Tavernier Hotel was used by the American Red Cross after that storm that devastated the Upper Keys.