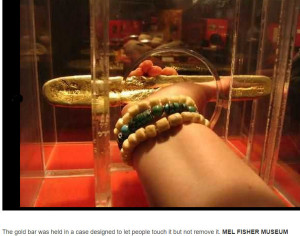 Lack of finding a 74.85-ounce gold bar plundered from a Key West museum five years ago come Tuesday has left an “open wound,” says the museum’s director. “The bar was insured but money will never replace an artifact that was part of so many museum visitors’ personal interaction and memories of the experience,” Melissa Kendrick, chief executive officer of the Mel Fisher Maritime Heritage Society, said Monday.

Key West police circulated images of two men purportedly involved with the theft but police spokeswoman Alyson Crean said there have been no promising leads or phone calls over the years. As such, the case remains unsolved. “Suspended unless some new information comes in,” Crean said.

The bar was recovered from the Santa Margarita shipwreck in 1980 by the late Key West shipwreck salvor Mel Fisher and his crew while they searched for the Margarita and Nuestra Senora de Atocha galleons. It had been on display in the museum for more than 20 years.

Kendrick said former FBI agent Robert Wittman, now running a Pennsylvania art-recovery business, told her in 2010 that stolen art could surface either immediately or five, 10 or even 15 years after the fact. “Crooks think nobody will remember the piece and try to sell it,” Kendrick said. “That is usually when the recovery is made.”

A $25,000 reward offered in 2010 for information leading to the recovery of the treasure remains. “It is an incident that evokes very emotional feelings in each of us,” Kendrick said. “We prefer to remain quiet and optimistic that Bob Wittman’s prediction will come to be.”