Islamorada Mayor Jim Mooney said one of the governing board’s main focuses in 2017 will be tackling traffic issues, a recurring theme for much of Monroe County. U.S. 1 has long experienced lengthy delays due to holidays, community events and accidents, among other things. Mooney said the village is working on two solutions to alleviate some of the gridlock in the area.

The first involves installing a mobile pedestrian overpass walkway at Founders Park. This idea first came to fruition late last year thanks in part to Village Councilman Mike Forster, who proposed the idea to the Florida Department of Transportation. In December, Islamorada learned that it would be the recipient of the state-funded overpass. Forster previously said it would likely be completed in 2017. The overpass will be a part of a FDOT pilot program. Similar structures are set for Key Largo and Marathon as well.

The second proposal to alleviate some traffic issues involves installing speed humps and possibly more stop signs along the village’s Old Highway, which parallels U.S. 1 along portions of Plantation, Windley and Upper Matecumbe keys, in order to discourage motorists from traveling on it when backups occur on U.S. 1. “Now [when vehicles do this] you get twice as many cars in the same linear mile,” Mooney said. Village staff is looking into contracting an engineering firm to conduct a traffic study before moving forward with any changes to the Old Highway. That will likely happen in the coming months. Some other points of interest Mooney talked about for the new year included streamlining the village’s building permit process and developing a realistic strategic plan with small goals for the community, such as possibly implementing a one-bus transportation system. “What’s really going to make the village a better place?” Mooney asked.

Village Manager Seth Lawless highlighted a few big jobs his staff would be working on in the new year. They include two canal restoration efforts as well as three public park improvement projects. Some Lower Matecumbe Key properties will likely reap the benefit of cleaner canals in 2017. Lawless spoke about two village canal restoration efforts there that are going out to bid soon. A third one could be added if Restore Act funds are available. This work is part of an ongoing effort to combat murky canals throughout Monroe County and will include, among other specifics, the installation of air curtains at the heads of canals to prevent debris from entering. The two Lower Matecumbe Key restoration efforts will likely be completed by the summer, according to Lawless. One, at about $100,000, is being funded by a Department of Environmental Protection grant while a large portion of the other, at $130,000, is being offset by a property owner in the adjacent area. 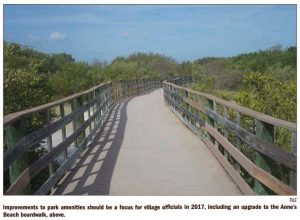 The entire village will likely reap the benefit of three potential park improvement projects in 2017. Lawless said last week that the preliminary word is that Islamorada will be receiving Monroe County Tourist Development Council funding to rebuild the Anne’s Beach boardwalk on Lower Matecumbe Key. The village asked for $600,000 to offset the $1.2 million price tag. Lawless also added that depending on bid amounts for the new boardwalk, the village could possibly upgrade the restrooms there if extra monies were available. The project could be completed by the end of the calendar year, according to Lawless. The village was recently presented with master plans for the revamp and revitalization of the Green Turtle Hammock and Key Tree Cactus preserves on Upper Matecumbe Key.

Lawless said those both will be a focus in 2017, but he wasn’t sure on specific timeline. Plans show the Green Turtle Hammock with an elevated boardwalk and observation tower, playground, kayak launch, small boat dock, game tables and extra parking, among other amenities. An optional restored waterfall and event tent was also listed. Plans for the Key Tree Cactus show elevated boardwalks, informational kiosks and a composting restroom, among other new amenities. Both preserves are already used as parks and have some amenities. There are no estimated costs for the entirety of the work. The next step will be to prioritize amenities for each park and come up with preliminary costs. The challenge, according to the Village Council, would be securing funding for it all. It was previously mentioned that the village might be able to qualify for state matching monies for some of the work.

Islamorada Chamber of Commerce President Judy Hull said it would pretty much be business as usual for the business support organization in the new year. When asked about any possible uptick in new businesses for the area, she said limited space would likely keep that in check. “We might see a switch of owners, but that’s likely about it,” Hull said. The first big event for the chamber in 2017 will be the annual Island Fest event on April 1 and 2 at Founders Park. In its 26th year, the festivities will include live music, art, food and classic cars.