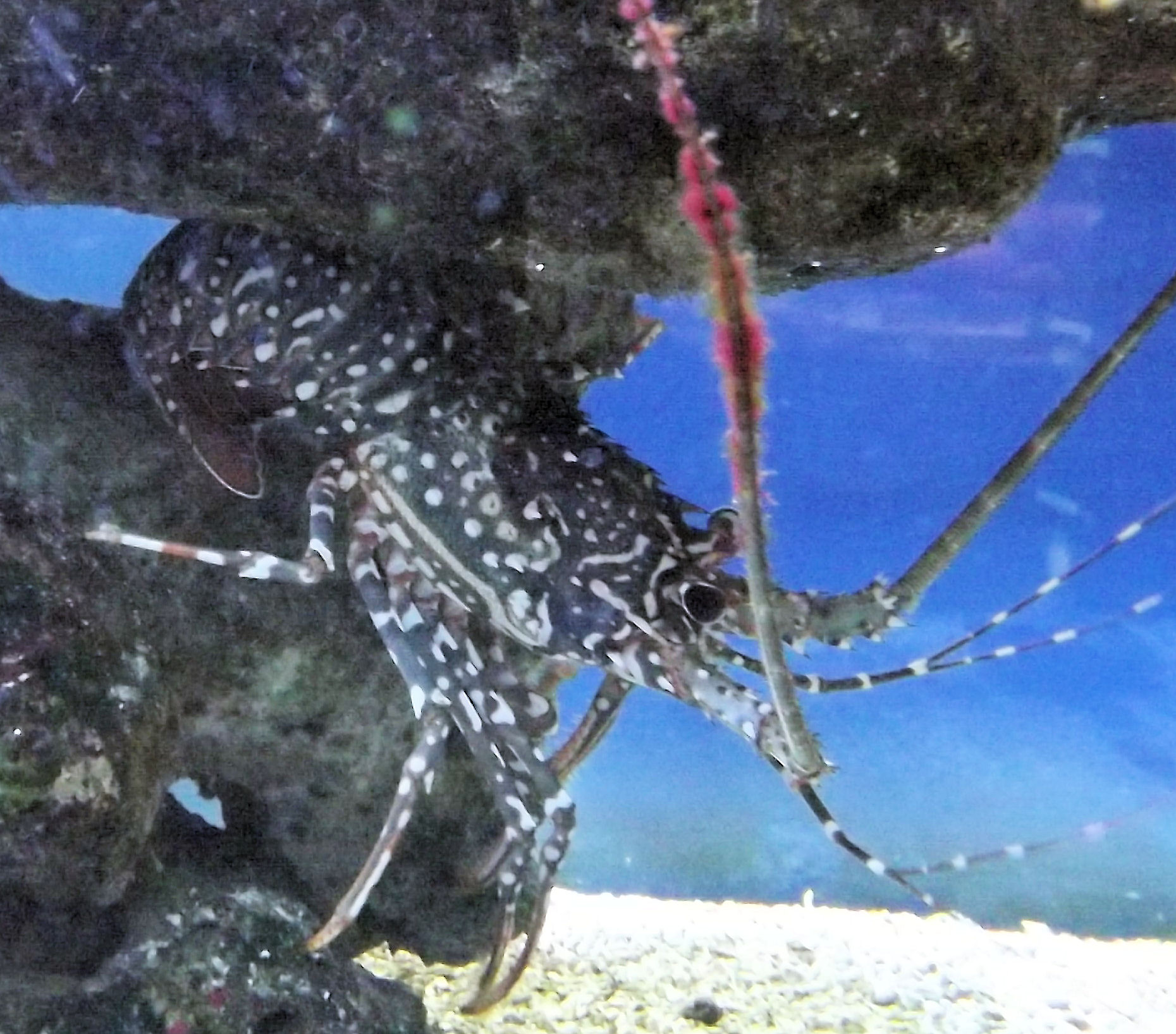 Panulirus guttatus is commonly known as the spotted spiny lobster or the Guinea chick lobster. It can be found in Bermuda and along the Central Atlantic coasts from Southern Florida to Suriname.

P. guttatus is generally a nonmigratory species and is restricted to the shallow fore reef on which it settles. However, females appear to partake in short migrations within their habitat during the breeding season in order to promote larvae dispersal. P. guttatus supports a commercial fishery in Bermuda, and as such, Bermuda has implemented a variety of laws to protect this species against overexploitation.

Panulirus guttatus is green, blue, or brown in color and covered in cream spots which extend onto the legs. Longitudinal stripes are present on the three most anterior pairs of walking legs (Sterrer 1986). P. guttatus has a transverse dorsal groove on each abdominal somite and supraorbital spines are usually present (Sterrer 1986).

Panulirus guttatus can be found along western Central Atlantic coasts from southern Florida to Suriname, throughout the Caribbean Sea, in the Bahamas and in Bermuda (Holthuis 1991). P. guttatus exclusively inhabits reefs and is most often found on the fore reef. P. guttatus also occurs at lagoonal patch reefs but numbers on the patch reefs are low (Sharp et al. 1997; Briones-Fourzán and Contreras-Oritz 1999). Generally observed in shallow water (Sterrer 1986; Pollock 1997), P. guttatus is typically seen in large, dark caverns and on the undersides of coral heads where it is able to fully retreat into the reef (Sharp et al. 1997). Individual lobsters spend their entire benthic lives restricted to a small portion of the reef on which it settles (Sharp et al. 1997).

Cooler temperatures and a shorter photoperiod in Bermuda restrict the breeding season of P. guttatus from May to October (Evans and Lockwood 1994); however, this species spawns year round throughout the remainder of its range (Sharp et al. 1997). The entire reproductive process, from mating to the eggs hatching, occurs in the coral reef habitat (Briones-Fourzán and Contreras-Oritz 1999). Furthermore, an area of high reef slope with complex structure provides protection and is therefore preferred by the relatively small female at the critical time of larval release. In general, larval release is followed by molting (Evans and Lockwood 1994).

The pueruli (a transitional form between planktonic and benthic juveniles) of P. guttatus settle directly on the underside of the reef (Sharp et al. 1997). Once settled, these lobsters spend their lives confined primarily to the outermost shallow reefs (Sutcliffe 1953; Sharp et al. 1997). Specific shelter requirements are thought to primarily control the abundance of this species (Sharp et al. 1997). Although P. guttatus is generally reef-dwelling and nonmigratory, it is capable of short-range movement throughout its habitat (Briones-Fourzán and Contreras-Oritz 1999). Movement throughout the habitat varies between males and females and is thought to be due to environmental factors as well as behavior changes linked with reproductive activities (Briones-Fourzán and Contreras-Oritz 1999).

Females migrate to the reef-crest areas in the seaward reefs, including the outer terraces near the edge of the platform, during the summer when they are ready to breed (Evans and Lockwood 1994). Such a seasonal migration may be associated with the release of their larvae into areas having maximum contact with the ocean current gyre (Evans and Lockwood 1994). A return migration to the reef-front terrace and outer terraces occurs from October to December. During the winter and fall, females are found in the reef flats and patch reefs of the outer reefs and inside the reef crest where mating is thought to occur in the spring (Evan and Lockwood 1994).

The occurrence of egg-bearing females is variable during the same season of different years and large females may spawn more than once each year (Briones-Fourzán and Contreras-Oritz 1999). Repetitive breeding results in a decrease in the growth rate of female P. guttatus due to reduced molt increments and increased intermolt periods (Negrete-Soto et al. 2002). Uninjured adult male P. guttatus molt at least 2-3 times per year; however, injury decreases molt increments and growth during molts (Negrete-Soto et al. 2002).