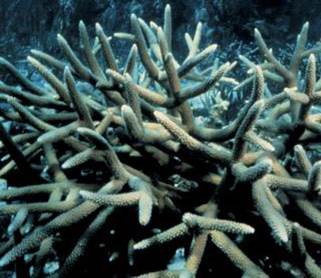 Staghorn coral is a branching coral with cylindrical branches.

The dominant mode of reproduction for staghorn coral is asexual fragmentation, with new colonies forming when branches break off a colony and reattach to the substrate. Sexual reproduction occurs via broadcast spawning of gametes into the water column once each year in August or September. Individual colonies are both male and female (simultaneous hermaphrodites) and will release millions of "gametes".

The coral larvae (planula) live in the plankton for several days until finding a suitable area to settle, but very few larvae survive to settle and metamorphose into new colonies. The preponderance of asexual reproduction in this species raises the possibility that genetic diversity is very low in the remnant populations.

This coral exhibits the fastest growth of all known western Atlantic corals, with branches increasing in length by 4-8 inches (10-20 cm) per year. Staghorn coral has been one of the three most important Caribbean corals in terms of its contribution to reef growth and fish habitat.

How do coral eat? Tropical corals, like staghorn coral, get as much as 90 percent of their energy from the organic byproducts of photosynthesis thanks to a symbiotic relationship with algae. They may also capture and consume live prey, such as small fish and zooplankton, using their tentacles.

Staghorn coral occur in back reef and fore reef environments from 0-100 feet (0 to 30 m) deep. The upper limit is defined by wave forces, and the lower limit is controlled by suspended sediments and light availability. Fore reef zones at intermediate depths of 15-80 feet (5-25 m) were formerly dominated by extensive single species stands of staghorn coral until the mid 1980s.

The greatest source of region-wide mortality for staghorn coral has been disease outbreaks, mainly of white band disease. Other, more localized losses have been caused by hurricanes, increased predation, bleaching, algae overgrowth, human impacts, and other factors. This species is also particularly susceptible to damage from sedimentation and is sensitive to temperature and salinity variation.

The dominant mode of reproduction for staghorn coral is asexual fragmentation; this life history trait allows rapid population recovery from physical disturbances such as storms. However, this mode of reproduction makes recovery from disease or bleaching episodes (in which entire colonies or even entire stands are killed) very difficult. The large role of asexual reproduction for this species also increases the likelihood that genetic diversity in the remnant populations is very low. Scientists are becoming increasingly concerned for this species based on its demographic paramaters; specifically, how species recruitment and genetic diversity affect recovery potential.

Florida Keys National Marine Sanctuary (FKNMS), the largest coral reef management entity in the region, has developed a management plan for the Sanctuary's corals that includes protective activities, such as zoning and channel markings, as well as restoration efforts.

Efforts within the sanctuary to re-attach Acropora fragments generated by ship groundings and hurricane events have had mixed success. Similar efforts to re-attach coral fragments have also been made in Puerto Rico and the U.S. Virgin Islands.

Attempts to culture and settle coral larvae have also had very limited success.

In 1998, the U.S. Coral Reef Task Force was established by Presidential Executive Order 13089 to coordinate and strengthen efforts for protecting coral reef ecosystems. The Task Force is co-chaired by the Departments of Commerce and Interior, and includes leaders of 12 federal agencies, 7 U.S. states and territories, and 3 freely associated states. In 2002, the Task Force adopted a resolution calling for the development of Local Action Strategies, which are locally-driven plans for collaborative and cooperative action among federal, state, territory, and non-governmental partners to reduce key threats on valuable coral reef resources. Florida, Puerto Rico, and the U.S. Virgin Islands have developed Local Action Strategies. These strategies were implemented over a 3-year period (FY2005-FY2007).