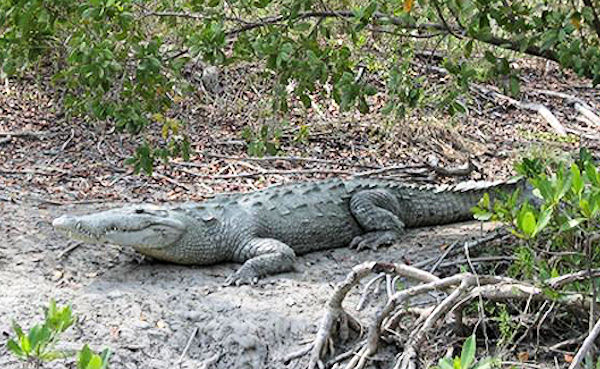 American crocodiles (Crocodylus acutus) are a shy and reclusive species. They live in coastal areas throughout the Caribbean, and occur at the northern end of their range in south Florida. They live in brackish or saltwater areas, and can be found in ponds, coves, and creeks in mangrove swamps. They are occasionally being encountered inland in freshwater areas of the SE Florida coast as a result of the extensive canal system.Like alligators, crocodiles are ectothermic, meaning they rely on external sources of heat to regulate their body temperature. Crocodiles control their body temperature by basking in the sun, or moving to areas with warmer or cooler air or water temperatures.A basking crocodile may be surprised by an approaching person and quickly (and noisily) enter the water. This behavior might startle the person, but it should not be misunderstood. Crocodiles would normally enter the water quietly; splashing away indicates that the crocodile is frightened.Crocodiles can also be seen sunning with their mouths open, or "gaping." This behavior is also related to regulating their body temperature, and does not mean that the crocodile is acting aggressively toward people.A crocodile will eat almost anything that moves. Hatchlings and young crocodiles eat small fish, snails, crustaceans, and insects. Adults feed mostly at night on fish, crabs, turtles, snakes, and small mammals. The growth rate of crocodiles varies with food availability and temperature. Digestion is efficient only within a certain range of body temperatures. Generally, crocodiles grow more slowly near the limits of their range.American crocodiles build nests that are either holes in or mounds of sand and other earthen material. Unlike birds and mammals, the sex of embryos is not determined at fertilization, but by the temperature at which the eggs are incubated. Temperatures of 88 to 91 degrees Fahrenheit produce mostly male offspring, and temperatures lower than 88 degrees result in mostly females. However, the temperature must remain above 82 degrees for the eggs to survive and hatch. Females lay from 20 to 60 eggs per clutch and incubate the eggs for about 85 days until they hatch in late July or early August. Female crocodiles build soil nests on elevated, well-drained sites. Nests are constructed so that the eggs will be above the high-water mark because crocodilian eggs cannot survive flooding for more than 12 hours. After nest construction, the female may not remain near the nest;however, toward the end of incubation, females visit the nest with increasing frequency. When hatching begins, the mother digs open the nest and may help some of the hatchlings emerge from their eggs. She may also assist the newly hatched crocodiles to water or nursery sites where they are released. Adult crocodiles leave the nesting areas within a day or two, leaving the hatchlings on their own. The hatchlings rapidly disperse from their nest and fend for themselves. Crocodiles typically live to an age of 50 to 70 in the wild.Predation, degraded hydrologic conditions, and habitat loss are the most important factors influencing the success of crocodiles in Everglades National Park. Although adult crocodiles have no natural predators other than humans, hatchlings have a high mortality rate and are preyed upon by other wildlife including raccoons, birds, and crabs. Alteration of salinity and water levels in Florida Bay resulting from extensive drainage programs throughout south Florida also are a factor. Crocodile nests that are too wet or too dry result in egg mortality. Suitable year-round crocodile habitat was lost with the development of the upper Florida Keys.Despite the setbacks, the outlook for crocodiles in Florida is optimistic and an excellent example of endangered species conservation success. Although the worldwide population of American crocodile is federally listed as endangered, the status of the Florida population has been changed to threatened because of a recent sustained increase in numbers, particularly nesting females. The nesting population continues to slowly increase, both in abundance and nesting range since effective protection of animals and nesting habitat was established. Protection of the remaining crocodile habitat in Florida and the restoration of the Everglades ecosystems will help ensure the survival of this species in the wild.
Displaying photo 2 of 14
« Previous Photo Next Photo »
Back To Gallery Page