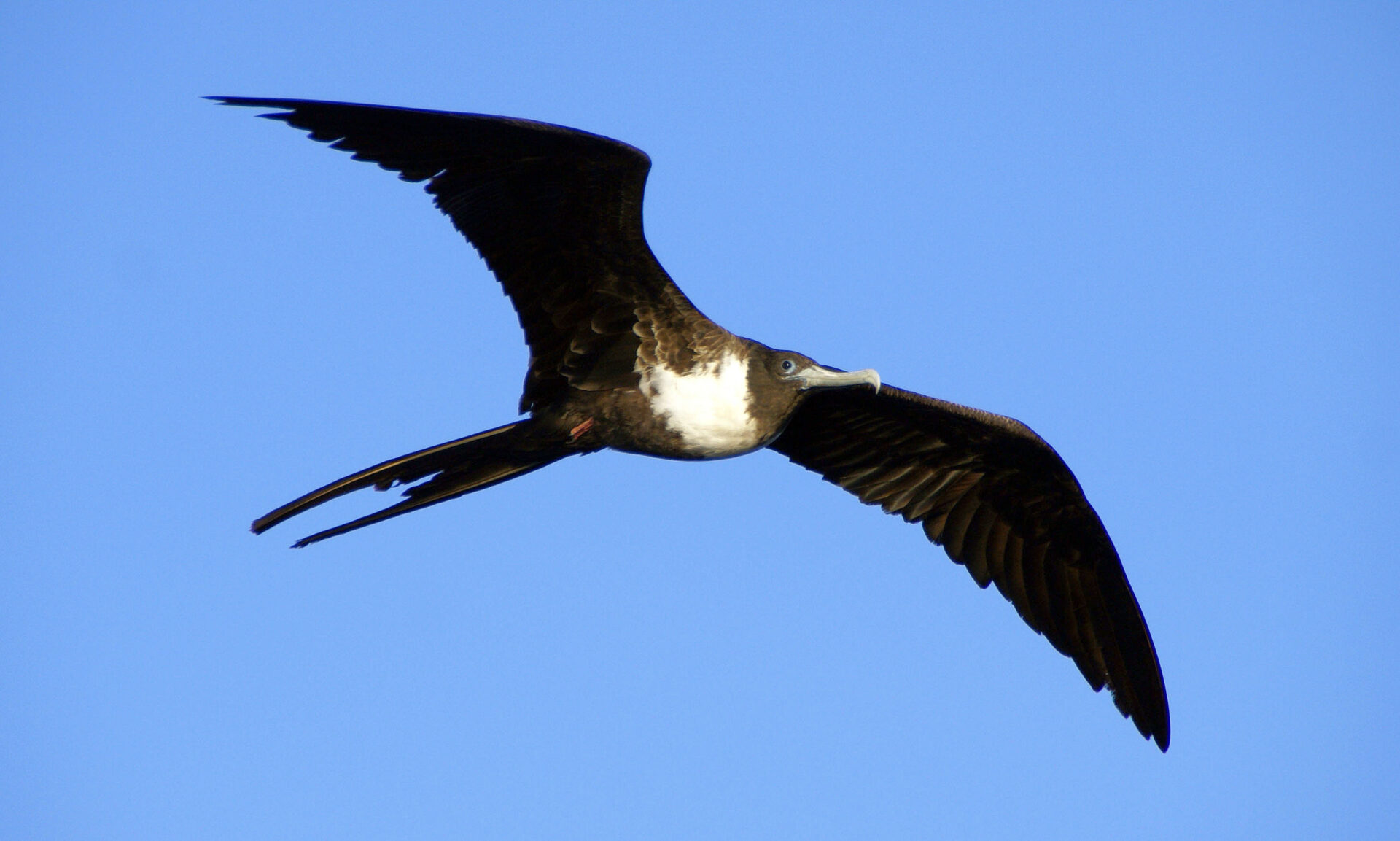 A long-winged, fork-tailed bird of tropical oceans, the Magnificent Frigatebird is an agile flier that snatches food off the surface of the ocean and steals food from other birds. It breeds mostly south of the United States, but wanders northward along the coasts during nonbreeding season.Frigatebirds are the only seabirds where the male and female look strikingly different. The breeding period of the Magnificent Frigatebird is exceptionally long and young fledglings are often still being fed by the female at one year of age.The male Magnificent Frigatebird abandons its mate and half-grown chick and leaves the breeding colony, presumably to molt and return for another breeding attempt with a different mate. The female cares for the young for over a year. This difference in parental care allows the male to breed each year while the female breeds only every other year.Although the Magnificent Frigatebird spends most of its life flying over the ocean, it rarely if ever lands on the water.Breeding habitats include mangrove cays on coral reefs, and deciduous trees and bushes on dry islands. Feeding range while breeding includes shallow water within lagoons, coral reefs, and deep ocean out of sight of land. Ranges along coasts and offshore islands and out at sea.Food - Fish, squid, turtles, crabs, jellyfish.Nesting Facts - Clutch Size 1 egg. Egg Description White. Condition at Hatching - Naked and helpless. Nest Description - Flat or slightly hollowed platform of sticks and twigs, some lined with finer material such as grass or vines. Placed on flat tops of low bushes or trees. Nests in colonies.In a spectacular courtship display, male Magnificent Frigatebirds sit in varying size groups, throat sacs inflated, clattering their bills, waving their heads back and forth, quivering their wings, and calling to females flying overhead.Snatches food from surface of water while flying past, and chases other birds to force them to disgorge food, which is caught in flight before it hits the water.Populations appear to be declining, due mainly to human destruction of habitat for housing and resorts, and disturbance in colonies. Introduced predators on islands and over-fishing are also potential problems. This species is on the 2014 State of the Birds Watch List, which lists species most in danger of extinction without significant conservation action.
Displaying photo 6 of 8
« Previous Photo Next Photo »
Back To Gallery Page