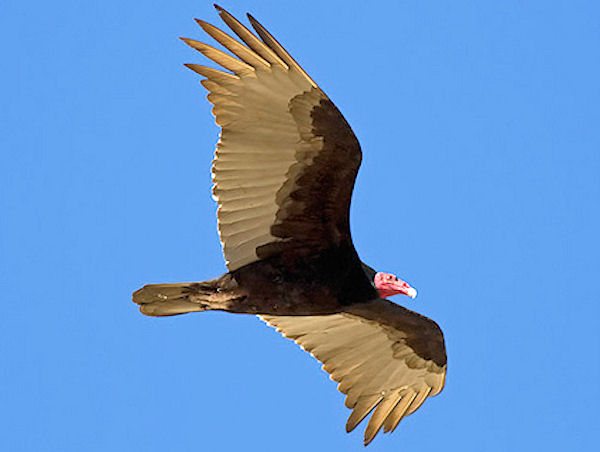 If you've gone looking for raptors on a clear day, your heart has probably leaped at the sight of a large, soaring bird in the distance– perhaps an eagle or osprey. But if it's soaring with its wings raised in a V and making wobbly circles, it's likely a Turkey Vulture. These birds ride thermals in the sky and use their keen sense of smell to find fresh carcasses. They are a consummate scavenger, cleaning up the countryside one bite of their sharply hooked bill at a time, and never mussing a feather on their bald heads.

Turkey Vultures are large dark birds with long, broad wings. Bigger than other raptors except eagles and condors, they have long "fingers" at their wingtips and long tails that extend past their toe tips in flight. When soaring, Turkey Vultures hold their wings slightly raised, making a ‘V’ when seen head-on.

Color Pattern - Turkey Vultures appear black from a distance but up close are dark brown with a featherless red head and pale bill. While most of their body and forewing are dark, the undersides of the flight feathers (along the trailing edge and wingtips) are paler, giving a two-toned appearance.

Behavior - Turkey Vultures are majestic but unsteady soarers. Their teetering flight with very few wingbeats is characteristic. Look for them gliding relatively low to the ground, sniffing for carrion, or else riding thermals up to higher vantage points. They may soar in small groups and roost in larger numbers. You may also see them on the ground in small groups, huddled around roadkill or dumpsters.

Habitat - Turkey Vultures are common around open areas such as roadsides, suburbs, farm fields, countryside, and food sources such as landfills, trash heaps, and construction sites. On sunny days, look for them aloft as early as 9 a.m.; in colder weather and at night they roost on poles, towers, dead trees, and fence posts.