Key West’s early history is similar to the rest of the Keys until 1821. Any landings, by European ships, 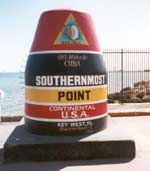 were short excursions exploring or looking for supplies. With a natural deep water port (which was the deepest port between New Orleans, Louisiana and Norfolk, Virginia) Key West eventually attracted settlers interested in commerce and it quickly became an economic center. Soon Key West became Florida’s largest populated city. There were professional residents such as doctors and lawyers as well as politicians, the military and journalists. Key West was Monroe County. It’s population far exceeded all the remaining Keys for the next 150 years.

How did Key West become a Tourist Town?


It is 1934, the end of the Great Depression and the beginning of president Franklin Roosevelt’s New Deal.

Once Florida’s largest city, the Conch Capital had seen its population plunge from 26,000 to 12,000 in 24 years. The cigar industry—11,000 jobs—had moved to Tampa and the sponge diving trade to Tarpon Springs. The era of shipwreck salvaging, the nefarious pursuit which once made Key West America’s richest city in per capita income, was long gone. Even the Navy was moving out after more than a century. Its biggest hotel and the only railroad serving the town were both bankrupt. Eighty percent of the Conchs were on welfare.

The city celebrated the Fourth of July, 1934, by declaring itself bankrupt. Key West surrendered all its legal powers to the state. Florida had problems of its own, so it passed the island kingdom off to the federal government.

Julius Stone Jr. was appointed to turn Key West around. He decided to turn Key West into a tourist mecca. Stone was an arrogant, high-handed administrator. Many things he did were illegal and it is apparent that he continually bypassed democratic procedures. He made deals that FERA guidelines did not permit. If he wanted it done, he just did it. But within a year unemployment was cut by two-thirds and business at hotels and restaurants boomed. Two years after the program started a proud Key West was able to resume the basic task of governing itself again.

Today Key West offers something for everybody. Outdoor activities include Diving,Fishing, Sailing and Nature Tours. The island also has many land based attractions such as: The Hemingway Home, The Audubon House, The Shipwreck Historium, Mel Fisher’s Maritime Museum and the Key West Aquarium. This is just the beginning of what Key West has to offer. The Restaurants and Bars offer some world famous choices such as Conch Republic Seafood, Alice’s at La Te Da and Sloppy Joes.

This nickname has become more popular as Key West continues to move to a tourist driven economy. This Southern most island you can drive to in the U.S. has always attracted its share of free spirits. Artists of all types have visited and either never left or shortly moved to Key West. The colorful history of writers, painters, sculptors, musicians and performance artists continues today. Many of the top attractions are directly related to these colorful residents. Spend an evening, beginning with the sunset celebration at Mallory Square, around Duval Street in Old Town Key West and you will be sure to understand the friendly moniker “Key Weird”

While you are visiting Key West, don’t forget there is more to experience in the Florida Keys. Consider other dive spots such as John Pennekamp Coral Reef State Park in Key Largo, Looe Key and the Dry Tortugas. Big Pine Key’s little Key Deer are a must see and you can relax in the small fishing town atmosphere of Marathon.